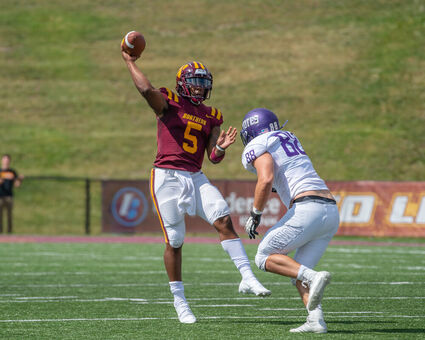 Northern's Kaymen Cureton passes the ball against College of Idaho on Saturday at Tilleman Field. Cureton finished his Lights debut going 13-27 for 126 passing yards, one touchdown and two interceptions. He also ran for 61 yards and one touchdown on 16 carries.

Heading into the fall camp, transfer quarterback Kaymen Cureton was one of four players competing for the starting quarterback spot. While he was the only quarterback not on the roster this past spring season, he had an established relationship with MSU-N head coach Andrew Rolin.

When Rolin was the recruiting coordinator at San Jose State, he tried to get Cureton to join the Spartans. Instead, Cureton chose to play for Nevada, where he got playing time as a true freshman in 2017. However, he found his way back to Rolin as he transferred to Eastern Kentucky University and now to MSU-N.