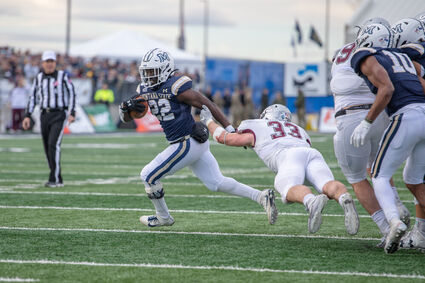 Isaiah Ifanse and the Montana State Bobcats have a new head coach in Brent Vigen, who replaces Jeff Choate after five seasons. The Cats also haven't played a real football game since December of 2019, but that will change Saturday when they visit the University of Wyoming to open the new season.

No team in college football was left unscathed by the COVID-19 pandemic. But, amongst Big Sky Conference teams, few have gone through so much change since the pandemic began than the Montana State Bobcats.

Not only have the Cats not played a real football game since a December, 2019 FCS semifinal appearance at North Dakota State, but, their head coach from that last season, Jeff Choate, is no longer in Bozeman. So too are many players from that stellar team, meaning, as MSU gets set to open the season at Wyoming Saturday night, the Bobcats are about to begin an entirely new era.

That era starts with new head coach Brent Vigen, who ironically, was hired away from Wyoming, and used to be the offensive coordinator at NDSU. Vigen came to Bozeman in the late winter, and the coaching change was a big reason why the Cats not only opted out of the Big Sky's spring season, but also opted out of playing football games at all in the spring.

Instead, the Cats have spent the last seventh months getting ready for the return of Big Sky and FCS football to the fall, and the time has finally come.

"It's a long time coming," said Vigen. "And our guys are the ones that have waited a long time. Us as coaches, it's certainly not about us, we're excited for our guys to go play, excited for the preparation, and excited about the opportunity in front of us."

That opportunity is for MSU to continue its ascent to the top of the Big Sky, and ultimately, the FCS. The Cats tied for second in the conference in 2019, and won two playoff games before falling to the Bison in the semifinals. Now, they want to continue their rise, as they come into the season ranked No. 12 in the FCS, and are led by a healthy Troy Andersen, who will play his finally year on the defensive side of the ball. Andersen, who has been MSU's starting quarterback and running back at different times, has found a home at linebacker, and will lead what Vigen hopes will be yet another stingy Bobcat defense, a hallmark during Choate's tenure.

"Troy is an extremely gifted young man, but he's every bit as determined as he is gifted. Vigen said to 406 Sports. "He's a tremendous leader, he's one of our captains, so I'm so excited to see it all with my own eyes in person. He means so much to this team just beyond his ability. It's hard to quantify."

Andersen has had major injuries his last two seasons, meaning, the COVID-19 layoff was probably a good thing for him in the longerun. He'll also have plenty of help around him on a MSU defense that includes the return of star DE Amadre Williams and defensive backs Ty Okada and James Campbell. Nose guard Chase Benson will also be one to watch for an MSU defense that will have some new faces as well.

Of course, as the Cats rely heavily on defense, offense is Vigen's calling card, and he'll lean heavily on the 1-2 punch of star running back Isiah Ifanse, who has rushed for 1,000 two years in a row, and new starting quarterback Matt McKay, a transfer for NC State. The Cats running game will be bolstered by major depth at the tailback position and a stout offensive line. However, Vigen also wants MSU to be explosive and McKay can be that with both his arm and his legs. Add to that the return of standout WR Lance McCutcheon and some big tight ends, and the Bobcats have the makings of being a very dynamic offense this fall.

And dynamic is what the MSU program has been the last five years. During Choate's tenure, the Cats rose steadily to a program that has had back-to-back playoff appearances and four straight wins over arch rival Montana. To continue those trends, the Bobcats will have to compete against the best of the Big Sky in a rigorous schedule.

After tough non-conference games against Wyoming, Drake and San Diego, the Cats open Big Sky play at Portland State. An Oct. 15 road game at defending champion Weber on ESPN, as well as a Nov. 6 trip to Eastern Washington also loom large on MSU's schedule. The Cats also get Northern Colorado, Cal Poly, Idaho State and Idaho at home, and of course, they then return to the road to renew their rivalry with the Grizzlies Nov. 20 in Missoula.

The tough schedule is also compounded by the fact that no player on Montana State's roster has played a live football game since December of 2019, and Vigen is also headed for his first head coaching experience. So, there's a lot of uncertainty as the Cats get ready to open at Vigen's old school. But, there's also so much excitement, because, this Montana State squad is going to be very, very good.

"The fact that we haven't played since (2019) there's certainly a lot of excitement, there's a lot of hunger," said Vigen. "I hate to say there's a little bit of uncertainty where guys are at too. Any time that you haven't played against another colored jersey in a long time, there's some unknowns that go along with that just how guys will perform on that stage."

The Cats play at Wyoming Saturday at 2 p.m.