Progress made toward fire suppression in RFD1 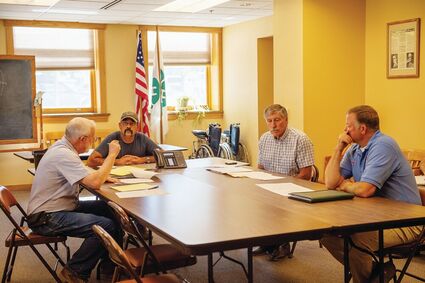 In an informal meeting Tuesday afternoon, Rural Fire District 1 Board Chair Steve Jamruszka and Havre Mayor Tim Solomon agreed on working language for a contract to provide fire suppression and the enforcement of fire codes to the district.

As it was an informal meeting, no document was signed, but Solomon said he was satisfied with the progress being made, and Jamruszka said he hopes to have the document signed by the end of the week.

Rural Fire District 1 is essentially a ring around Havre in which the Havre Fire Department previously provided fire suppression services.

The city in December announced it would cancel the previous contract effective at the end of June to enable writing another contract which delegated responsibility for enforcing fire codes in the district.

Havre Mayor Tim Solomon has said there are buildings in RFD1 that are being built with fire code violations and they need someone local to handle enforcement of these codes.

The board and the city failed to reach a new agreement by the original deadline, leaving Rural Fire District 1 unprotected, at least on paper. After the deadline passed, Solomon gave an extension which would have run out July 15 but was then extended through the end of July and and again to the end of August.

The conflict came to a head last week after RFD1 allowed that deadline to pass, after which the district was again left unprotected.

After a tense meeting last week, one last two-week extension was granted on the understanding that the RFD1 board would work toward appointing someone to enforce fire codes.

Hill County Disaster and Emergency Services Coordinator Amanda Frickel, who expressed significant frustration at the situation, as well as Kremlin Rural Fire Department Chief Kody Peterson offered at that time to cover fire code enforcement during the extension and at Tuesday's meeting both offered to do that through June of 2022 in order to give the RFD1 board enough time to work out the specifics of an ongoing enforcement plan.

"I'm willing to do whatever it takes," Peterson said.

Jamruska said the board doesn't want to name a single person as fire chief, but he does have a plan for local enforcement of the fire codes that he hopes will work, provided it is feasible.

"I've got a framework in my head, but I've got to meet with some people," he said.

Solomon said the contract given to him must include language that gives Peterson and Frickel, or someone, local authority to enforce fire codes while Jamruszka works on this framework, but as long as that is the case, he's willing to sign the contract.

"That's all that we've been asking all along," he said.

Solomon and Jamruszka briefly discussed the possibility of contracting the work of fire chief out to the city, but the proposed price tag was too high for the latter.

Solomon said if the city were to take the job on, they would want to fully commit and take care of all duties of the fire chief in accordance with Montana state law, which they determined would require a half-time employee and cost about $50,000 per year.

He said he's not surprised the district doesn't like that number and said there are cheaper alternatives it can use to address the most important code enforcement issues in the district.

He said the city is not overly concerned with small issues like defective exit lights and minor code infractions, but is concerned about large violations they see going on in the district that they want addressed for the sake of everyone's safety, including their firefighters who provide suppression services.

Jamruszka talked about some specifics but Solomon said that's more than what the city needs for now, which is just an agreement to have someone local enforce fire codes.

He said there are other things the district needs to do in accordance with state law in terms of inspections and things like that, and if the board wants to get into those things he's happy to do so, but in the immediate sense, he's only concerned with making sure the city firefighters and RFD1 residents are protected by the enforcement of codes.

In addition to dealing with this issue they also discussed a few language changes to the contract, most of which were for the sake of eliminating redundancy and increasing clarity.

One of the only major language changes would make it clear that the contract between the district and whoever ends up doing fire code enforcement would be separate.

Jamruszka said the city would still be able to examine any contract they make and its adoption would be contingent upon the city's written approval. Solomon said that arrangement is acceptable.

The only other major change agreed upon was to add the requirement that the contract with the city be signed by one of the Hill County commissioners.

Jamruszka said the only reason he thinks the change is sensible is because the county is already required to approve similar contracts with entities outside the district, so it makes sense to include them.

Solomon said the change may be a bit redundant, but he doesn't object.

Jamruszka said if the contract gains the support of the board and city all that's left is for the Hill County Commission and the state to sign off.

Frickel and Peterson said they'd meet with Jamruszka soon to hash out the specifics of their ongoing service to the district as fire code enforcers.