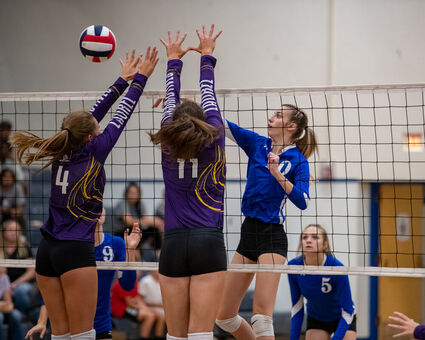 The Havre High volleyball team is off to a strong start this fall. Not only are they 2-0 to start the season, but they have swept both of their opponents at home. Now they look to continue their winning ways when they host Columbia Falls tonight and Miles City this Saturday at Blue Pony Gymnasium. HHS head coach Stephanie Huse expects a pair of good matches, especially against Columbia Falls.

"I expect a really good match from Columbia Falls," Huse said. "They're going to be tough but I look forward to it. It's nice to get a team from the west to come to our side and play us."

While Columbia Falls lost many all-conference players from last season, they still return some solid players. Jazzy Marino returns for her senior season after being named second-team all-conference last season. The team will also be led by last year's Northwest A coach of the year Jolandie Brooks.

Columbia Falls should be a tough outing for the Blue Ponies as they are one of the strongest programs in Class A volleyball. In last year's state tournament, they survived the loser's bracket to make it all the way to the championship match against Billings Central. While they are a different team from last fall, Huse expects their strengths to carry over into this year.

"They're just sound all the way around. They've got good setting, mixing up the offense," Huse said. "When a program's established the way it is, they'll come in confident and ready to give it to us."

After a tough match against Columbia Falls, the Ponies will only have a day's rest before they play Miles City Saturday night. Havre has already defeated Miles City this fall in the tip-off tournament in Sidney last month. In the two sets played, Havre won by scores of 20-8 and 20-5. Despite all of this, Huse expects the Cowboys to play competitively.

"They're a good team so that'll be a battle," Huse said. "It'll be our fourth match in, like, a week so we've got to just really make sure that we stay consistent and finish the week as best we can."

This season, Miles City will be trying to replace the production of three all-conference players who graduated. Despite the loss of their best players, Huse believes they had some solid players returning.

"They have some big blockers," Huse said. "They work really hard and they have good teamwork."

With two matches in a span of three days, Huse will have little time for getting her team prepared. During that small amount of time, she will work on cleaning some things up in order to compete with Columbia Falls and Miles City and continue their winning ways early in the season.

"We've got to work a little bit on our system offense when the ball doesn't get to the center, cleaning that up a little bit," Huse said. "And then our blocking. We had a lot of hands on the ball (Tuesday against Laurel), but we weren't strong enough with it. So we'll work on that a little bit more."

The HHS volleyball team will play tonight at 6 p.m. against Columbia Falls at Blue Pony Gymnasium. They will then host Miles City Saturday at 4 p.m.