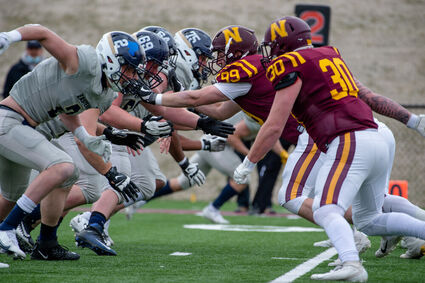 The Montana State University-Northern defense battle Eastern Oregon during a spring Frontier Conference game last April in Havre. The Mounties are off to a 2-0 start to the 2021 season after they were picked to win the league title this year. EOU and Rocky Mountain College are the only undefeated teams left in the league after two weeks. Meanwhile, Northern will travel to Southern Oregon Saturday after their game with SOU was postponed last week due to the wildfires burning in the Western U.S.

The first week of the season was fun. Now, Frontier Conference football teams are in the thick of it. Except, two teams didn't get to play last week.

The Southern Oregon Raiders were set to make their home debut against the Montana State University-Northern Lights last Saturday, but air quality from Western U.S. fires was so poor in Ashland, Oregon, that, the game had to be postponed. Northern had already boarded buses to head west last Wednesday when the news came down that the game would be moved to this Saturday.

Fortunately, the Lights and Raiders, who have not played each other since 2019, both had byes coming this week, so they'll make up the game Saturday in Ashland instead.

For Northern anyway, moving the game to this Saturday eliminates the Lights from their regular bye week, since they are playing an 11-game, schedule this fall. Still, the Lights had a bye as a result of last Saturday's postponement, likewise for the Raiders, who like the Lights, started the season off with a tough loss two weeks ago.

Eastern Oregon was picked to win the Frontier this fall for good reason. Kai Quinn, the Mounties four-year starting quarterback, returned for his senior season, and with Quinn leading an already explosive offense, there was no reason not to think the Mounties would be really good this year, and so far, they have been.

Facing a huge home -opening test last Saturday in LaGrande, the Mounties outlasted Montana-Western 33-28, in a game that many considered to be between the two best teams in the league.

Quinn was his spectacular self, as he threw for nearly 300 yards and four touchdowns, while rushing for 44 more on 10 carries. EOU's defense also held Western running back Reese Neville to just 79 yards on 20 carries, after Neville had exploded out of the gates in week one.

Western and Eastern won't meet again this season, meaning the Mounties already have the tiebreaker over the Dawgs, who, instead of having a bye this week, will face off against nationally ranked Dickinson State in a non-conference affair in Dickinson, North Dakota.

Rocky Mountain is also off to its best start in some time after beating College of Idaho 33-30 last Saturday.

Thanks to the play of quarterback Nate Dick, who threw for 294 yards and rushed for 54 more, the Battlin' Bears overcame an early 14-0 deficit.

Dick has been at RMC for three years after transferring from Montana. But this is his first season injury-free, and he's making waves in Billings.

Speaking of byes, the Frontier will be off this week, with the exception of Northern and SOU's makeup game and Western's trip to DSU. Carroll College which is 1-1 to start the year, EOU and College of Idaho, which are both 1-1, Rocky Mountain college which is 2-0, and Montana Tech, which is off to a tough 0-2 start, will all have this weekend off with an early-season bye.