Skylights return to the road after a week of rest 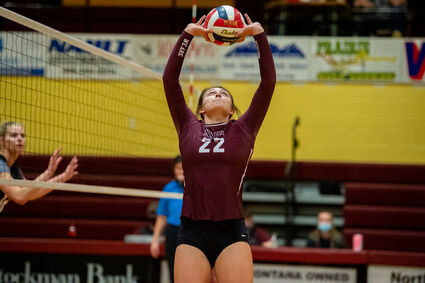 Emily Feller and the Montana State University-Northern volleyball team will have four road matches at the North Star Conference Challenge Friday and Saturday in Dickinson, North Dakota. The Skylights are just one week away from making their long-awaited home debut when they host the Frontier Conference preseason Tournament next weekend in the Armory Gymnasium. This weekend, Northern plays both Dickinson State and Valley City State.

The Montana State University-Northern volleyball team is anxiously awaiting their first home matches of the 2021 season. But, before Northern finally gets to the Armory Gymnasium, the Skylights must face one more week of road matches.

Northern, however, should be well rested.

After opening the season with back-to-back road trips to Arizona, the Skylights had last weekend off. Now, they'll head east to Dickinson, North Dakota, for four matches in the North Star Conference Challenge. In Dickinson, MSU-N faces the host Blue Hawks, as well as Valley City State.

The Skylights enter their last...