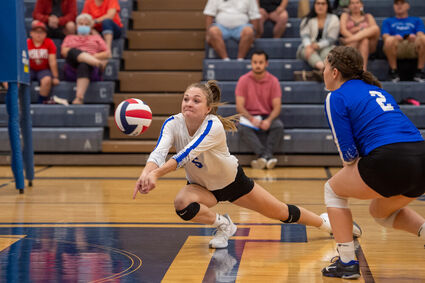 Havre's Jade Wendland dives for the ball against Columbia Falls at Blue Pony Gymnasium Thursday night. The Havre High volleyball team swept Columbia Falls by winning their sets by scores of 25-8, 26-24 and 25-11 to move to 3-0 early in the season.

Columbia Falls was a key early-season match for the 2-0 Havre High volleyball team. The Wildkats made it all the way to the State A tournament title match last season, making this match a test to see how good the Blue Ponies could be. On Thursday night at Blue Pony Gymnasium, Havre demonstrated they are more than good enough as they defeated Columbia Falls, 3-0, by winning their sets by scores of 25-8, 26-24 and 25-11.

"They are always surprising me with how much they love to play volleyball. Every single time they step on the floor, they just love it so much and they just want to compete," HHS head coach Stephanie Huse said about her team. "And they proved it, not only when we're up but they proved it when we started to maybe sink because that's volleyball and they fight back and they stay in it."

The win moved the Ponies to 3-0 on the season and 3-0 at Blue Pony Gymnasium so far this fall. At the start of the first set, the Ponies came out determined to show what they got as they raced out to an 8-0 lead. Even after the Wildkats got on the scoreboard, several kills from Yelena Miller and Jade Wendland pushed Havre's lead to 21-5.

"Our serving was just tough. I do feel like we have a lot of strong servers all the way around," Huse said about the hot start to the set. "If we stay consistently strong, we're pretty tough and I think that first set showed that."

"We started to get a little frustrated and that's volleyball," Huse said. "It's rare that you're in a volleyball game and momentum doesn't shift one way or the other and it shifted and it shifted pretty hard."

Over the rest of the stretch, the Ponies and Wildkats exchanged the lead several times. Columbia Falls eventually took a 24-23 lead for a chance to win the set and tie the match. However, the set was tied when the Wildkats committed a serving error. Miller gave the Ponies the lead with a kill and then a Molly Huse block won the set, 26-24, for a 2-0 lead in the match.

"We were just really worried about staying level and not freaking out too much because that's a very good team," Molly Huse said about the team's mentality down the stretch. "We just had to stay level headed and make sure we did our job, played our game."

Kyanna Jarvis led the Ponies with seven kills while Miller and Maddie Columbus each had five. Wendland finished the night leading the team with three blocks. Huse had another strong night for Havre with 24 assists and three service aces. On defense, Alyssa Oliver led Havre with ten digs.

As the Ponies celebrate their win, they will not have much time before their next match. Saturday, they will test their early undefeated record when they host Miles City at home. With the win over Columbia Falls, Stephanie Huse believes the experience they got against a team from the Northwest A will be beneficial for the Ponies going forward.

"We don't get a chance to see a lot of teams in the West, especially a quality team like Columbia Falls," Huse said. "That's why I wanted to play because it's a test to see where you measure up against a good program and we did that so it feels good."