Lights football to play at University of Oregon stadium 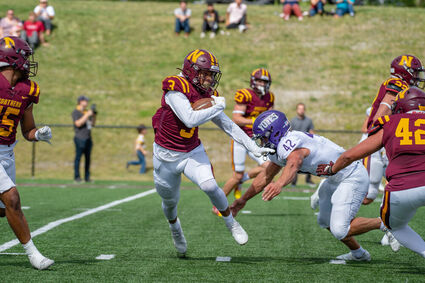 Damari Cual-Davis runs with the ball against College of Idaho at Tilleman Field last month. The Lights look to win their first game of the season when they play Southern Oregon University at Autzen Stadium in Eugene, Oregon, Saturday.

After having their game at Southern Oregon University delayed last week because of fires in the area, the Montana State University-Northern football team will finally get to play the Raiders this weekend. However, the game will not be played in Ashland, Oregon, but will be played at Autzen Stadium in Eugene where the University of Oregon plays their games.

The game was moved from Ashland to Eugene because the poor air quality caused by the fires had not subsided yet. Unfortunately, the game in Eugene will not allow fans as part of the agreement with Oregon's administration in an attempt t...