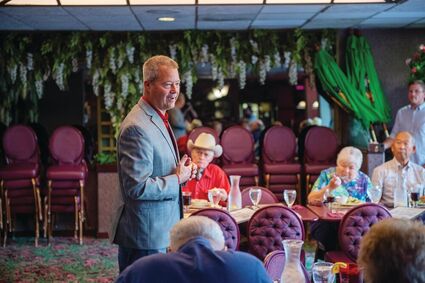 Dr. Al Olszewski, who has declared his intent to run for Congress, talks Friday to the North Central Pachyderm Club in the Duck Inn Vineyard room.

Dr. Al Olszewski, who recently announced his run for Montana's second congressional seat, made a stop at the Duck Inn in Havre Friday to speak to the North Central Pachyderms Club and ask for the support of its members.

During his speech to the group, Olszewski indicated his support for more restrictive immigration and refugee vetting policies and decried the influence of religious nonbelievers in America.

Before talking about any of that, however, he took some time to speak about the then-upcoming anniversary of the 9/11 attacks on the U.S.

He said he remembers that on that day he was heading to what is now known as Logan Health in Kalispell to preform surgery when he heard over the radio that a plane had hit one of the towers.

Olszewski said he thought it may have been a horrible accident until he arrived in the surgeons' lounge to see on television the second plane hit.

"It was sickening to know that this was not an accident," he said.

Olszewski said that the next day, Americans forgot about party and put their country first, taking comfort in then-President George W. Bush's vow that those responsible would be found.

Unfortunately, he said, the implementation of the Patriot Act came soon afterwards, an infringement on Americans' liberties, supposedly for the sake of safety.

He compared the Biden Administration's recent mandate that all employers with more than 100 workers require them to be vaccinated or test for the virus weekly to the Patriot Act, saying it was another infringement upon Americans' liberties, calling the Thursday speech by President Biden where he announced this mandate a lecture.

"He said he's growing tired of those of us who believe we have a right to self-determination," he said. "... I'll tell you that my patience is already gone with him."

He also heavily implied that this speech was an attempt to pit American's against each other and deflect their attention away from America's disastrous withdrawal from Afghanistan.

Olszewski said the withdrawal and subsequent advancement by the Taliban made 9/11 feel like yesterday.

20 years of strife, and we just walked away, he said.

The language of war was also used when he transitioned into talking about the political conflicts in the U.S.

"We are in a battle for the soul of our country and for our constitutional republic," he said. "... We're in a battle to see if, once and for all, the government can take total control of us. What are we going to do about it? What are you going to do?"

He said the government of the United States belongs to its people and those in power are trying to flip that dynamic.

The majority does rule, he said, but the minority has rights that are being trampled, but he added that the minority can create a mass movement to overwhelm the left's "blitzkrieg."

Olszewski said he hopes to be part of that fight against the "hard-left" in Congress and praised Montana's current representative, Republican Matt Rosendale, for his efforts in that fight.

He said he knows some people are expressing a desire for unity but doesn't know if it's possible for Americans to do that at this point. The left's agenda, hew said, must be pushed back on, which is what he aims to do.

Olszewski voiced distaste for undocumented immigrants and refugees and said that they are bringing diseases to the United States and causing outbreaks.

Among the few specific policy positions he voiced support for was that of a border wall, which he said should have narrow gates and long lines of people who want to be Americans first.

He also decried the influence of religious nonbelievers in the U.S., describing them as power hungry and implying they were unfit to lead politically.

"Liberty means nothing to them," he said.

Olszewski indicated that belief in God is intrinsic to being conservative.

Olszewski also voiced his opposition to the infrastructure bill making its way through Congress, saying America must live within its means.

He also said one of his priorities as a congressman would be to increase election security and that the current distrust in the system has lead to less peaceful transitions of power.

Olszewski blamed the lack of peace during transitions of power on anarchists and anti-fascists but made no mention of the Jan. 6 attack on the U.S. Capitol building by supporters of then-President Donald Trump.

Olszewski promised the Pachyderms that if he becomes their congressman they will not regret supporting him.

"I won't disappoint you and a won't embarrass you," he said.

When asked about his opponent in the primary, former U.S. Secretary of the Interior Ryan Zinke, he said he is at a disadvantage when it comes to name recognition for the moment.

He said a poll conducted by his campaign found that around half of Montanan's knew his name, which is pretty good, but around 80 percent knew Zinke, so there is ground to cover.

He said he has put together an excellent team, and he's doing his best to raise money, and it seems to be working.

Olszewski said his campaign in its opening months has raised almost as much as his last two political races did in total.

He said former President Donald Trump's recent endorsement of Zinke is also not as dire a hit to his campaign as some might think.

He said after the announcement of that endorsement it only seemed like people were sending him larger campaign contributions because they knew the fight would be harder.

When asked about Montana's new congressional district, which has yet to be officially drawn, Olszewski said he is worried about democrats attempting to gerrymandering the district to pack liberal areas together.