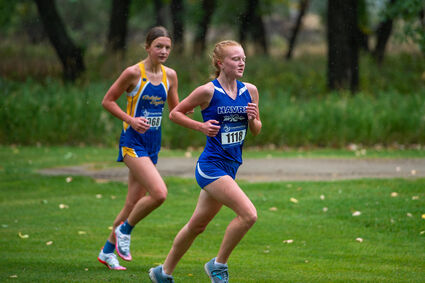 Heading into the Havre Invite at Prairie Farms Golf Course Saturday, the Havre High cross country team's goal was to at least place third out of all the tough teams competing at the meet. Based off times early in the season, HHS head coach Erin Lynch expected such a finish for the Blue Ponies. However, the Ponies exceeded her expectations as both the boys and girls teams finished second at the Havre Invite.

"We came out looking to get some season-best times and so I think quite a few of the kids ended up doing that today, so I'm pretty happy with that," Lynch said. "I knew that on this course and with the home crowd cheering for them, we'd see some big PRs."

Not only did the Ponies have to deal with the competition, but they had to deal with the rain during their run. Hailey Gingery, who experienced the most rain in the girls 5,000, noticed how the weather affected her running.

"Made your thighs chafe and it would wet down the dirt so it would pack onto your shoes," Gingery said. "Then you would kick it up and hit yourself in the back with it and make your feet really heavy."

While the weather may have put some damper on things, Ponies such as Caleb Tomac were excited at their only chance to run at home this season.

"It was awesome. We'll only have one home meet this year, so it's a memory right now and you got to cherish it," Tomac said. "Great to see all the familiar faces, and everybody came to watch."

In front of the home crowd, Tomac set his personal best time this season with a finish of 17:22.6. After winning his first two meets of the season, Tomac's personal record was not enough as he finished second behind Wolf Point's Peyton Summers who finished with a time of 17:17.9. However, Tomac was proud of his performance against some of the best runners he has faced so far this season.

"I thought it was awesome. A huge PR because the first two courses around were definitely tough but the pace was honest the whole way. A little fast in the beginning but I had to stick with the front pack," Tomac said. "These guys know how to run. They train. Peyton Summers, he's a great overall runner, and I'm glad I got to be able to race and compete with them."

With many of her runners achieving personal bests this past weekend, Lynch now has a better idea of how her runners are progressing and how they compare to their competition. She hopes she can use this information to help her runners get better as the teams move forward with the rest of the season.

"This is probably the flattest course we've run so far this season and so having this as a baseline time a few weeks in is going to help us have a better idea of how we're stacking up against other teams as we move forward," Lynch said. 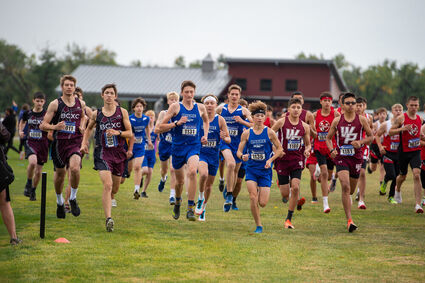 HHS cross country will next compete at the Mountain West meet in Missoula this Saturday.