Frontier Notebook: Battlin' Bears seem to be on the rise 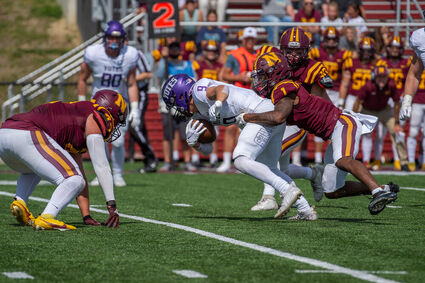 Montana State University-Northern's Josh Rose makes a tackle in a Frontier Conference game in Havre against College of Idaho last month. Last week, the Lights got to play in historic Autzen Stadium, while this week, they'll play in Vigilante Stadium in Dillon against nationally ranked Montana Western.

Many Frontier Conference teams had their annual bye week early this season. But there were two very unique games on the slate last weekend.

The Montana State University-Northern Lights had their Sept. 2 game at Southern Oregon moved back one week due to poor air quality in Ashland, Oregon, from western wildfires, but a week later, things were still bad, so the game was moved to Eugene.

Yes, Northern and SOU played their Frontier Conference game, won but the Raiders 42-7, inside famed Autzen Stadium on the University of Oregon campus. The experience was a great one for both teams, although...