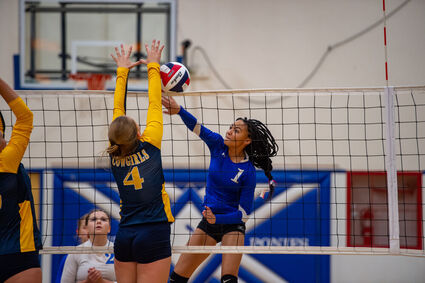 Havre's Kyanna Jarvis spikes the ball against Miles City at Blue Pony Gymnasium last weekend. The Havre High volleyball team hopes to bounce back from their loss to Miles City as they head on the road to play Sidney tonight and Glendive Saturday.

The Havre High volleyball team played their first four matches of the season over a span of nine days. After their most recent match against Miles City, the Blue Ponies got a break of nearly a week before their next match on the road against Sidney tonight. While the Ponies lost their most recent match in five sets against Miles City, HHS head coach Stephanie Huse hopes that experience as well as the week of rest will help her team tonight.

"Playing Miles City to five, that was the first time we had played a five-set match all season so that was a good experience," Huse said. "Just making sure that we're prepared to go and have energy throughout the entire match."

Like many teams the Ponies will play this season, they already played them at the tip-off tournament in Sidney last month. In the two sets played to 20 points, Havre won by scores of 20-10 and 20-17. However, Huse has seen Sidney improve since then.

"They took Billings Central to five games recently so that speaks volumes. It shows that they're competing hard and really just improving every single time they compete," Huse said. "So we need to be prepared for that intensity and work that they're putting in."

The Ponies have shown promise so far this season with an early 3-1 record. However, they are coming off of a 3-2 loss to Miles City in their last match last Saturday. One area the Havre team struggled in was winning close sets, so they will need to be more clutch down the stretch against Sidney tonight.

"When we're hanging in certain games with teams, we need to be able to close out," Huse said. "We need to serve a little bit tougher than we did against Miles City and just make sure that we keep energy throughout the entire match."

With their last match taking place Saturday, the Ponies got the chance to rest and regroup from their loss. The break also gave Havre time to prepare for what will be their first road match of the season after four straight matches at home.

"Being on the road is always different. Every time we travel, it's a long distance," Huse said. "So I think just preparing ourselves mentally for that and then being on an opponent's floor and making sure that we don't let outside distractions get us off task of what we're there for."

After their match against Sidney, Havre will play Saturday night when they head to Glendive. With the match being their second in two days, Huse expects a fight.

"Glendive is extremely competitive and they run a very strong offensive system," Huse said. "They're always going to battle with you and take you down to the wire. So we know it's going to be a tough match against them."

Glendive has several players returning from last season. After an all-state season last year, Brittney Kaufman should return to lead the Devils as a senior. Junior Saddie Egan will return after being named second-team all-conference last year. Mallory Robinson also hopes to build off last year where she was named honorable mention all-conference.

Havre also faced Glendive in the tip-off tournament in Sidney where the Ponies won both sets by scores of 20-15. However, Huse believes Glendive has improved since then as they are currently unbeaten.

"Everybody's at the top of their game right now competing against everybody, so it's going to be a battle every time we hit the floor," Huse said.

While the Ponies have had a good start to the season, momentum could shift if they do not bring their best this weekend. If they are going to still have a winning record after this weekend, they will need to stick together and control the matches.

"Just make sure we're staying within our match. Staying focused, staying together," Huse said. "Making sure that we're the aggressor throughout the matches is going to be key whether it's serving, whether it's on our attack and just being really tenacious on defense and serve receiver I think are going to be keys."

HHS volleyball will play at Sidney tonight at 7 p.m. The Ponies will then head to Glendive for a match on Saturday at 4 p.m.