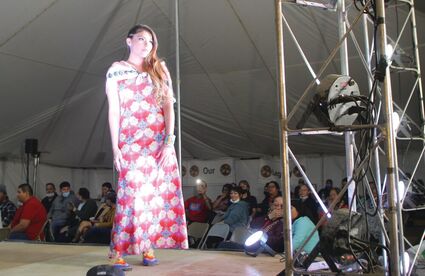 A model stands on the runway showing clothing by Elias Not Afraid Friday during the Honor Our Legacy Fashion Show at Northern Winz Casino.

The 2021 Honor Our Legacy Fashion Show was held at Northern Winz Hotel and Casino Friday, featuring the work of Native American fashion designers and artists.

The show held raffles, played music and was generally meant to be an upbeat affair, but it was not without solemn moments as well with Master of Ceremonies Russell Standing Rock leading a prayer.

He said it's been a tough year for Rocky Boy as a communi...