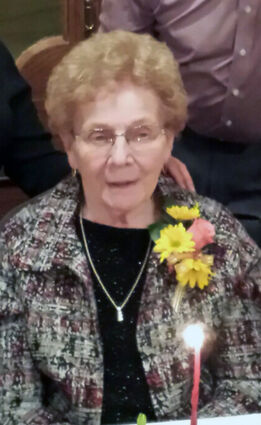 A Celebration of Life will be held Saturday, October 16, 2021, at 10:30 a.m. at the Faith Community Church in Highwood, MT; Lunch will follow at the Community Hall.

Lila was born in Fort Benton, MT, November 26, 1927, to L.R. and Lillian (Evers) Swan and raised on the family ranch near Highwood. She attended country school and graduated from Highwood High School in 1945. Lila went on to graduate from Montana State College - now MSU - in 1949, where she was a member of the AOII sorority and president of the service club "Spurs."

While attending MSC, Lila met the love of her life, Herbert Pasha and one week after graduation the couple were married; they shared 59 years of marriage prior to his passing. They resided in Highwood, where they farmed and ranched in partnership with her brother Miles and his wife Doris.

Lila was a very involved community member; She was a leader in Woman's Club, Flower Club, the Bethany chapter of Eastern Star, 4H leader, track coach (she and Marge Walker organized and coached the first girl's track team at Highwood High School), Pep Club advisor and many bridge clubs. She also volunteered at the Charlie Russell house in Great Falls and was a member of Highwood Faith Community Church.

Herb and Lila always put family first; they both were so proud of all their children, grandchildren and great-grandchildren; encouraging all they pursued. They were at every ball game, play, concert, recital, competition and graduation that they were able to attend.

Enjoyment of life and having fun was important to Lila. Many family times were had at the cabin on Whitefish lake and on trips to Disneyland and Hawaii. Herb and Lila enjoyed many trips with fellow board members around the state and country. They also took great delight in the many friends with whom they spent time hunting and fishing. All who knew her recognized her love of cards and bridge most especially. She found her true passion, however, when she began creating pottery in her 50s. She continued this art into her late 80s. Later in life, Lila was able to celebrate both her 50th and 70th college class reunions (in 1999 and 2019) and attend the MSU commencement ceremonies in Bozeman.

Lila's family will forever be grateful for the support from her friends and the amazing and loving staff and volunteers at Peace Hospital these last months. The love and compassionate care she received will be remembered always.

Memorials can be made to the Highwood School Scholarship Foundation or to Peace Hospice in Great Falls. To share condolences with the family, please visit http://www.croxfordfuneralhome.com .