Havre football falls on the road to Billings Central 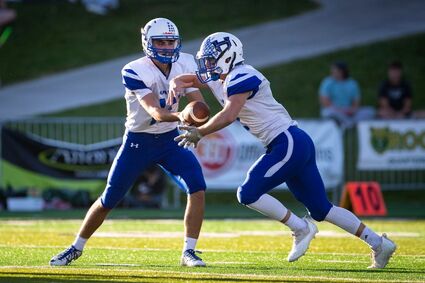 Havre's Trenton Maloughney hands the ball off against Billings Central Friday night at Herb Klindt Field. Despite running for over 100 yards as a team, the Blue Ponies lost to Billings Central, 37-7, to fall to 2-2 on the season.

The Havre High and Billings Central football teams entered the 2021 season on different trajectories. The Blue Ponies were coming off a losing season while the Rams were coming off a year where they made it all the way to the state title game. When the Ponies and Rams played Friday night at Herb Klindt Field in Billings, Billings Central continued to look like a strong program as they took advantage of several Havre miscues to win 37-7.

"Anytime you get a chance to go down there and play against one of the best teams in the state, you got to make sure you handle the football and take care of ball security and you don't have unforced errors," HHS head coach Ryan Gatch said.

The Ponies played well to start the game. On a fourth down in Havre territory, the Ponies recovered a Billings fumble to take over. On their ensuing drive, Havre benefited from a Billings personal foul to get all the way to the Rams 42-yard line. But on the next play, the Ponies fumbled the ball and Billings scooped it up and took it all the way back to the Havre six yard line. Kade Boyd then took it in for the six-yard score to give Billings a 7-0 lead with 3:16 left in the first quarter.

After forcing a Havre punt, Billings' running game drove them right down the field to the Havre two-yard line. Boyd got the ball again and took it in for the score to extend their lead to 14-0 with 9:52 left in the first half.

When Havre got the ball back, they were able to get their running game going. On the drive, they picked up a pair of first downs including a fourth-down conversion. But once they got on Billings' side of the field, the Ponies lost another fumble to the Rams. Billings capitalized on that turnover with another rushing touchdown from Boyd for a 21-0 lead with 1:04 left in the half.

Things did not get much better for the Ponies to start the second half as Boyd ran for a 70-yard touchdown on their opening play of the half for a 28-0 lead. Over the course of the next quarter and a half, the Rams scored another touchdown as well as a field goal to extend their lead to 37-0.

Late in the game, the Ponies finally got on the scoreboard when quarterback Trenton Maloughney connected with Jason Wold deep down the right sideline for a 55-yard touchdown. But there was not enough time for it to kickstart a comeback as Havre fell 37-7.

While the Ponies struggled to get on the scoreboard, their running game continued to pile up the yards. Orion Thivierge continued to lead the Ponies on the ground as he ran for 70 yards for 4.6 yards a carry. Crawford Terry also ran for 63 yards on 5.8 yards an attempt.

With the loss, Havre falls to 2-2 on the season and 0-2 on the road. While the Ponies dropped the game, Gatch believes their performance showed some promise for the season going forward. For example, his team committed fewer penalties than they did in previous weeks. But he knows that if Havre is going to get back in the win column in their next game, they will need to do better than they did against Billings in several areas.

"It's going to be critical that we can keep an established run and then when we're in the red zone we're able to get the ball into play and then obviously we got to get off the field on third down and fourth down," Gatch said.

HHS football will next play against Miles City in their homecoming game Friday night at 6 p.m. at Blue Pony Stadium.