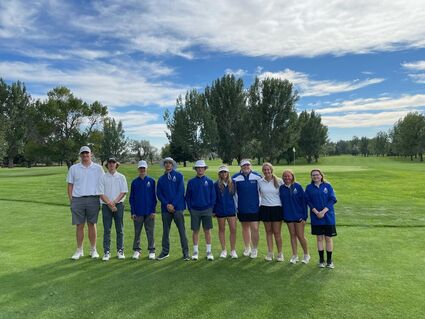 The Havre High boys and girls golf teams take a photo after the Laurel Invitational last Friday in Laurel. Havre High wrapped up the regular season last weekend, and will head to the Eastern A divisional tournament this Friday in Sidney.

The Havre Blue Pony golf teams are ready for divisionals. But before the Ponies go there, they played two tough golf courses to wrap up the regular season.

On Thursday, Havre took part in the Billings Central Invitational at Peter Yemen Golf Club, where the HHS boys finished fifth, though they shot a stellar 337. Theron Peterson paced Havre with a 79, which got him a Top-10 finish overall. Caleb Spangler fired an 81, while Kale Reno shot 86, and Matt Huse and Shane Patascil each shot 91.

On the girls side, Havre finished fifth, led by a 102 from Shea Reber. Katharine Greenwood shot 106, S...