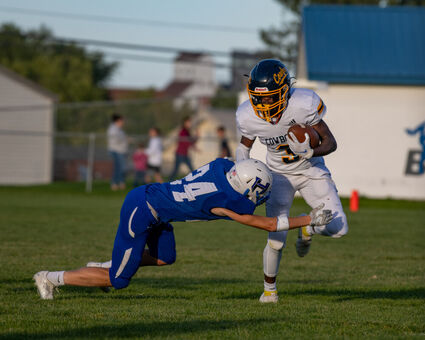 Havre's Carson Harris tackles a Miles City player in their homecoming game at Blue Pony Stadium on Friday night. The Blue Ponies lost to Miles City, 40-0, to fall to 2-3 on the season.

It was an exciting week at Havre High School as students celebrated homecoming week. The festivities lasted through the week and culminated on Friday night when the HHS football team hosted Miles City at Blue Pony Stadium. However, homecoming week ended on a bitter note as Miles City defeated the Blue Ponies, 40-0.

The Cowboys set the tone early as they drove down the field on their opening possession. Th...