Veteran signal caller Kaymen Cureton had a connection to Andrew Rolin, and a desire to help the Lights keep building 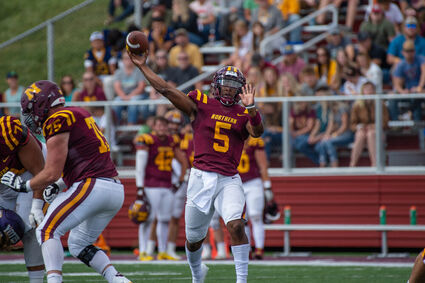 Montana State University-Northern's Kaymen Cureton runs with the ball during the Lights' home opener last month at Tilleman Field. Cureton has quite the journey to find his way to Northern, but, it all started when he was recruited by now MSU-N head coach Andrew Rolin while his was a junior in high school in southern California.

It took a while, but Kaymen Cureton found a home in the Montana State University-Northern football program. After playing high school football in Los Angeles, his collegiate journey took him to Nevada and Eastern Kentucky before finding his way to Havre.It was quite the journey.

As the quarterback tried to find a new football team, he ultimately decided to play for the Lights because of MSU-N head Andrew Rolin.

Back in high school, Cureton got his first collegiate offer from Rolin while he was on the coaching staff at San Jose State. While his journey took him elsewhere, Cureton and Rolin eventually reconnected to get him playing for the Lights this fall.

"It came back full circle. I wanted to come here and just play for him," Cureton said. "He's a great coach. Should have played for him anyway so it's just a blessing."

Cureton received his initial offer from Rolin during his sophomore year at Los Angeles High School. Many players that Cureton knew at the time were getting 30 or 40 offers from colleges, so getting an offer from Rolin was special to him.

"For him to be my first one, it's kind of different for me," Cureton said. "He trusted in my ability before anybody else did so love him for it and appreciate him for it."

He initially decided to join Rolin at San Jose State but after a staff change was made there,, Cureton decided to play elsewhere. He chose to play for Nevada coming out of college. While he was on the roster for several years, he only got the chance to start one game for the Wolf Pack. He decided to transfer to FCS Eastern Kentucky University but still did not get much playing time.

"No hard feelings towards anybody but I wasn't the guy there," Cureton said about his previous schools. "I got to find a place where I was the guy and just been working to find it and this is home now."

While Rolin was what drove Cureton to join the Lights, Cureton also saw promise in the program. Over the past few seasons, the MSU-N football program has failed to record a winning season and has not won a game in the Frontier Conference since 2016. However, Cureton believes Rolin and the Lights are building up a program the right way, and he wanted to do his part in helping that process.

"It was an opportunity I couldn't pass up. I've seen the culture that's building," Cureton said. "Everybody would probably judge and look at it differently but I see something for change where I can make change and I wanted to come in and do that."

Cureton joined the program this past summer after the Lights had completed their shortened spring season. During the summer, Cureton met with Rolin to learn the offense which he said took him about a month. While he learned the offense, Cureton also grew to appreciate the players and coaches already on the team.

"Just the guys. They've been working and building a foundation here. They love each other already so it's easy to transition into," Cureton said. "The coaches are wonderful too. We just got to win for each other now."

So far this fall, Cureton has started all three games for the Lights. He has completed 48.9 percent of his passes for 461 yards, three touchdowns and four interceptions. He has also made an impact on the ground as he has ran for 181 yards and a touchdown on 4.2 yards a carry. MSU-N is 0-3 to start the season but Cureton believes that if he and his teammates can clean up the little things, it will go a long way in changing the program's trajectory.

"Changing the culture. Just the weeding out the small things and holding onto our mistakes," Cureton said was his focus since joining the program. "Practicing with intent, lifting with intent, all of those things so just building a culture."

Even though Cureton has only been a member of the program for a few months, Rolin believes he has already cemented himself as a leader for the team.

"He's a great leader, guys love him. He works hard. He leads by example and he's becoming a vocal leader," Rolin said. "Kids love him. He's a good leader. I'm so excited to see him grow."

Joining a new football team has not been the only adjustment Cureton has had to make. After growing up in Los Angeles and going to college in Reno, Nevada and Richmond, Kentucky, Havre is different than what he's used to. However, as long as he gets to play football in front of a passionate fanbase he's happy.

"Not much to do at all but my focus is for football," Cureton said. "I love it and the community is big out here. They love us, we love them. We got to perform and get a win for them." 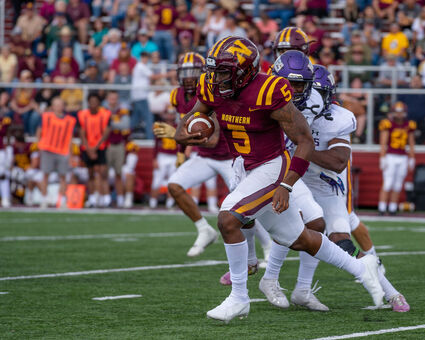 Montana State University-Northern's Kaymen Cureton runs with the ball during the Lights' home opener last month at Tilleman Field. Cureton has quite the journey to find his way to Northern, but, it all started when he was recruited by now MSU-N head coach Andrew Rolin while his was a junior in high school in southern California.

While he plays for the Lights, Cureton is majoring in liberal arts and minoring in psychology at MSU-N. After college, he hopes to become a sports agent to help professional athletes build their brands and manage their money.

Outside of school and football, Cureton channels his creativity into music and clothing. Like his favorite musicians Nas and Jay Z, Cureton records his own rap music. He also designs his own clothing, a passion of his since high school when he and his brother started their own company.

As a redshirt junior, Cureton hopes to help build the MSU-N program over the next few years. Not only does he want to show what he's got as a player but he also wants to inspire others to see that MSU-N can be a winning program.

"(I'm) hoping to end with a winning season," Cureton said about his goals for his time in the program. "Help the guys see we can win and come out with a certain level of focus next time we do step out here and have a certain level of accomplishment. So it's to build a tradition and get people coming out here."

Cureton and the Lights play their homecoming game Saturday at 1 p.m. against Rocky Mountain College at Tilleman Field.