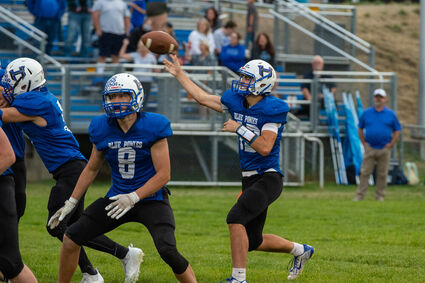 Havre's Trenton Maloughney throws a pass against Hardin at Blue Pony Stadium earlier this month. The Havre High football team will try to to improve on their 2-2 record when they play Miles City tonight in their homecoming game at Blue Pony Stadium.

Through four games this season, the Havre High football team has a 2-2 record. While they have picked up wins against Sidney and Hardin at home, the Blue Ponies have dropped road games against good teams such as Lewistown and Billings Central. Tonight, the Ponies will face another strong opponent in Miles City but Havre will get to face them at home at Blue Pony Stadium in their homecoming game.

"Blue Pony Stadium is the greatest spot in Class A football to play a game," HHS head coach Ryan Gatch said. "It'll be a great opportunity for us to get after one another. They're a good football...