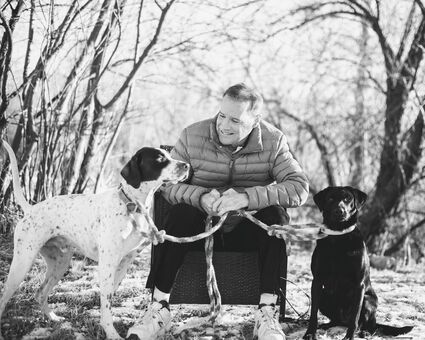 Heaven became a more interesting place today as it welcomed Neal Donaldson. Neal passed at home surrounded by the love of his life, Michelle Cameron Donaldson, and all of his critters that he loved so much.

Neal was born on May 5, 1957, in Ann Arbor, Michigan, to Alexander G. Donaldson and Elizabeth A. Donaldson. He was the middle child and loved to torment his sisters, Claire and Jan Donaldson. Neal was an athletically gifted child and excelled in sports, eventually being awarded a track and football scholarship to Berkshire Academy in Massachusetts, and going on to play football for the University of Oregon.

Neal learned to love the outdoors as a child and was a lifelong hunter and fisherman. His hunting adventures took him all over the world. Some of his most memorable conquests were his successful archery grizzly hunt in Russia, two archery mountain lion harvests, and a beautiful red deer in Argentina. Neal was also fascinated with raptors, and took up falconry in his early 20s, a passion he pursued until his death. Neal was an accomplished skier and became an Anwarter certified ski instructor while living in Austria, and eventually moved on to become part of the ski school in Portillo, Chile.

While completing his MBA at Oregon, Neal travelled the world studying international banking systems. Before he settled back in the states he studied in France, Spain, Austria and Chile. As a result of his extensive travels, Neal was quite a linguist and spoke four languages fluently. Neal arduously pursued his mastery of languages, and on a fateful trip to a language school in Costa Rica, he decided to make a side trip to the English riding school across the road. Neal quickly excelled at jumping and fox hunting, and made regular trips across the country to fox hunt and improve his equestrian skills. After he married Michelle, he brought horses into her life and she was quickly hooked. Over the years, Neal would often joke that perhaps introducing Michelle to horses was not such a good idea.

After completing graduate school, Neal's love of the outdoors and skiing landed him in Vail, Colorado. Neal put his business degree to work, and opened a wine store that he owned for 20 years. Neal's love of skiing also helped him find the love of his life. In January of 2001, he was skiing by himself when he happened to get on the lift with a tall brunette who was also skiing on her own. It was clear that there was a spark between them from their first trip up the mountain together, and three months and two days latter Neal asked Michelle to marry him. They were married in Kitzbuehl, a small village in Austria, the following year. Shortly after, Michelle convinced him that they should move home to her native Montana. Neal sold the wine store and took a position with a financial firm in Washington, D.C. They split their time for several years between Washington and Montana, and eventually found their forever home in Livingston, Montana.

Neal and Michelle loved to travel, and made it to almost every continent and many countries. They were always off having some great adventure, enough adventure to fill several lifetimes; until Neal's body started to fail him. Despite this he faced all of his physical challenges with the greatest courage, and was still hunting, shooting, and working his bird dogs until the end.

Neal is survived by the love of his life, Michelle, his mother and sisters, great lifelong friends, his adoring bird dogs, his falcon Era, and his amazing horse Kimo. Neal's life was an epic adventure, and he insisted that none of us shed tears for his passing, but rejoice in the memories of all of the great times that were had.

An outdoor memorial service will be held at their property, 388 Old Clyde Park Rd, Livingston, MT, on October 9th at 3 p.m. followed by a bonfire wake. In lieu of flowers, he requested donations be made to the National Falconry Center toward the falconry fund, https://falconryfund.org/make-a-donation , or the Havre Boys & Girls Club, http://www.bgchi-line.net/give-today .

Franzen-Davis Funeral Home and Crematory has been entrusted with arrangements. To view the tribute page and leave condolences, visit http://www.franzen-davis.com .