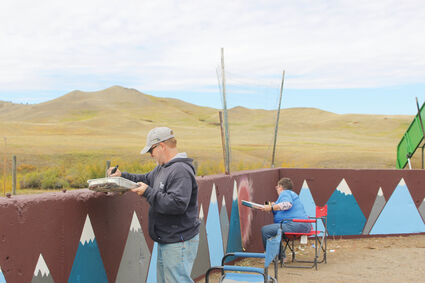 Darryl Meznarich and Kim Springer work Sept. 23 on painting over graffiti at the dump site at Beaver Creek Park.

Wipfli Havre Administrative Assistant Kim Springer, who originated the idea, said the accounting firm does something like this every September, and this year Beaver Creek Park seemed like the natural choice.

She said she and other fellow Wipfli employees Anna Toner, Melissa Moog of Malta, Heidi Richter of Joplin, Darryl Meznarich and Dana Springer did the work Sept, 23, with Brad Tommerup of the Unified Disposal Board providing the brown paint for the background.

Kim Springer said many people in the office use and enjoy Beaver Creek Park and she's friends with Park Superintendent Chad Edgar, so she asked him if there was anything they could help him with this year, strapped as the park is for workers.

"It's overwhelming to keep that park as beautiful as it is," she said.

Springer said she thought of the concrete retaining wall near one of the park's dumpsters which has some profanity-laden graffiti on it, and she thought it would be nice to cover that up.

"I didn't want to drive through there and see that with my kids," she said.

While she came up with the idea, she said, many others expanded on it and the group ended up deciding not to just cover it up, but to paint something nice over it and they made a day out of it. 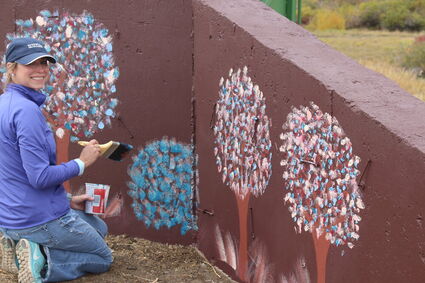 Springer said the weather ended up being great and it was an excellent opportunity to help the community, as well as the staff to get to know each other more personally and show off their artistic side.

She said it was also nice to get some time out of the office, and many people came up to them and thanked them for their work throughout the day, with cabin owners being especially appreciative.

She said they still have some left over paint so they may expand upon it in the future.

In an email Springer thanked Tommerup for trusting them with the project.