Back at it: Lights and Alumni have a blast on the mat 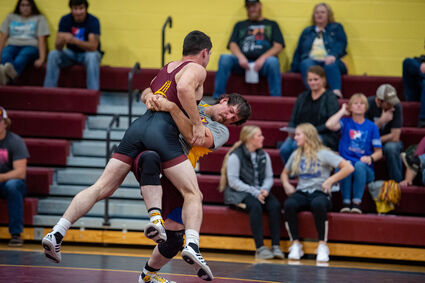 Not only did the dual allow MSU-N alumni to return and wrestle on the mats again, but it also allowed MSU-N head coach Tyson Thivierge to evaluate where his team is at before the season begins later this month.

"We exposed our weaknesses. We got some things to work on and so that's what this is about," Thivierge said. "We had a blast doing it. We had so much fun."

The matches consisted of three periods each with each period only lasting one minute. While it was hard for his wrestlers to get in a flow with short periods, Thivierge also believed they increased the urgency.

"That's the beauty of having that one minute period. That puts us in a spot," Thivierge said. "You got to act like you're down right away. You got to pull the trigger right away."

The MSU-N alumni defeated the Lights, 36-22, to win the dual. Many of the alumni that wrestled Saturday had graduated from the program in the past few years, including 2021 alumnus Dylan Veis, who started the dual with a 3-2 win over redshirt freshman Georgino Moraga. Fellow 2021 alumnus Steeler French then faced off against redshirt junior Rylan Moldenhauer with the alumnus winning by pin in the second period.

Matt Weber returned to the mats after a career at MSU-N where he was named an All-American twice in 2016 and 2018. On Saturday, he and redshirt sophomore Lane Paulson went extra periods but Weber emerged with a 5-4 victory. Later in the dual, Weber wrestled redshirt freshman Connor Harris but lost, 6-4, in extra periods.

Most of the MSU-N alumni team were made up of wrestlers from the 2020 class. Brennon Veis earned a 1-0 win over freshman Colin Silverthorn. Jase Stokes won by a pin in the first period against freshman Micah Cashdollar. Rob Pair defeated redshirt junior Kaleb Frank, 5-0. Alumnus and MSU-N wrestling assistant coach Landon Bailey lost, 4-3, to freshman Colby Schriever.

Former Northern great Beau LaSalle did not have to travel far to wrestle Saturday as he currently serves as the Havre High wrestling head coach. In his match, he lost, 4-1, to freshman Kaleb Sanchez.

In the last match of the dual, the most-accomplished alumnus got on the mat. During his time in the MSU-N program, Brandon Weber was a three-time All-American and was a national champion in 2017. He faced off with his former MSU-N teammate Chase Short who is now a senior for the Lights. In a match that went to extra periods, Short defeated the former national champion, 3-1.

"It felt great. I wish I was in better shape but it was awesome," Weber said about wrestling on the MSU-N mats again. "It was just awesome to be wrestling like the old days like we did in practice."

While Weber and many other former MSU-N wrestlers collected many accolades during their time in the program, they also learned a lot that shaped them into the men they are today. With that in mind, they take every chance they can get to return to Havre and help the program even after they are gone.

"This program helped me become the person I am today," Weber said. "I have a lot of lifelong friends here. It's just an awesome atmosphere. I spent a lot of time here. I spent five years of my life here so it just brings back old memories every time I drive back to Havre." 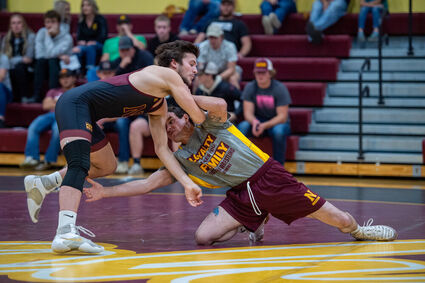 Former Light and MSU-N assistant Landon Bailey shoots during an Alumni Dual match against Colby Schriever Saturday in the Armory.

The MSU-N wrestling team will compete in the Maroon vs. Gold Dual at Armory Gymnasium on Oct. 21. The Lights will then begin the regular season when they to wrestle North Idaho College Oct. 29.