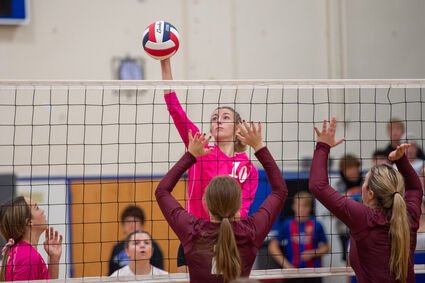 Havre's Maddie Columbus spikes the ball against Sidney at Blue Pony Gymnasium on Saturday. Columbus was one of three seniors honored on senior night on Saturday. The Havre High volleyball team defeated Glendive and Sidney this weekend to improve to 10-1 on the season.

While the Havre High volleyball team has had a successful season so far, this past weekend could have tripped the Blue Ponies up. The Ponies could have gotten complacent as they had won five straight matches heading into the weekend. The Ponies also held their senior night Saturday which always brings out the emotions. Despite all these factors, the Ponies continued to play well as they defeated Glendive and Sidney Friday and Saturday at Blue Pony Gymnasium.

"We played well over the weekend. We were pretty focused," HHS head coach Stephanie Huse said. "Knowing the importance of the weeken...