Lights shut down by Carroll College 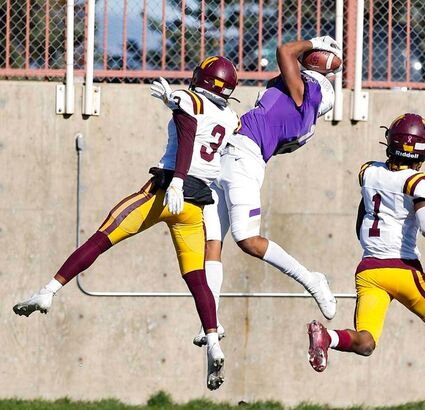 Northern defensive back Damari Cual-Davis covers a Carroll College wide receiver in Helena on Saturday. The Lights lost to Carroll, 34-0, and dropped to 0-6 on the season.

Late in the month of September, it looked like the Montana State University-Northern football team had been making progress. Against Montana Western and Rocky Mountain College, the Lights offense scored 28 points each and almost defeated RMC. But the MSU-N offense has struggled lately including a 34-0 loss to Carroll College in Helena this past Saturday.

“Lack of execution against a pretty good football team. Probably one of the worst first halves we’ve played in a while,” MSU-N head coach Andrew Rolin said. “Got to fix our mistakes. If we don’t fix our mistakes, we’ll get the same results.”

While the Lights had trouble scoring points on offense, their defense continued to make plays like they have all season. On the Saints opening drive of the game, Carroll quarterback Jack Prka’s pass down the left sideline was intercepted by MSU-N defensive back Isaiah Paul.

Thanks to the pick, the Lights started their opening drive at the Carroll 38-yard line. However, they could not move the ball and punted back to Carroll. On Carroll’s next drive, the Saints marched down to the MSU-N 20-yard line but failed to convert on fourth down. But the Lights gave it right back when MSU-N quarterback Devonte Armstrong’s pass was intercepted by Tucker Jones and returned to the MSU-N 20-yard line. The Saints converted that turnover into a field goal for a 3-0 lead late in the first quarter.

“He made some rookie mistakes but he also did some good stuff,” Rolin said about Armstrong’s performance in his first start of the season. “We got to protect him a little bit better. He forced the ball a couple times when he didn’t need to but then there’s some other times where he got us out of some situations.”

Over the next few minutes, the Lights and Saints exchanged punts. Carroll eventually got a drive going into MSU-N territory but again failed to convert a fourth down. The Lights failed to carry that momentum into their ensuing offensive drive and went three and out. Carroll then blocked the Lights’ punt and started the drive at the MSU-N 21-yard line. Four plays later, Prka connected with Jaden Harrison for a four-yard score to make Carroll’s lead 10-0 just halfway through the second quarter.

Carroll got the ball back with little time left in the half and looked to take momentum into the half. After Prka found Camron Rothie for a 35-yard gain to the MSU-N 40-yard line, the Carroll quarterback then connected with Tony Collins for a jump ball in the end zone with four seconds left in the half. The extra point was botched but the Saints were able to salvage the ball and score two points for an 18-0 lead heading to halftime.

The Lights got the ball to start the second half and were able to pick up a couple of first downs. However, the Lights fumbled the ball on the snap and Carroll linebacker Cameron Pruitt scooped the ball and returned it 40 yards for the score.

MSU-N continued to struggle on offense and gave the ball right back to Carroll. After another Lights punt, the Saints scored with a 44-yard touchdown run from Duncan Kraft to push their lead to 31-0 halfway through the third. Armstrong then threw an interception to Kaden Gardner at the MSU-N 15-yard line that the Saints converted into a field goal.

On their opening drive of the fourth quarter, the Saints made it to the MSU-N five-yard line but the Lights blocked the field goal attempt. The Lights had a chance to score near the end of the game but they failed to convert on fourth down at the Carroll 13-yard line.

In his first start of the season, Armstrong completed 47.6 percent of his passes for 155 yards and two interceptions. Tyrese Rios led the Lights with six catches for 77 receiving yards. After three straight games with over a hundred yards rushing, Izayah Boss only ran for 28 yards on 17 carries. Overall, the Lights only finished with 36 rushing yards.

“Structurally their defense doesn’t allow much in the run game,” Rolin said. “They do give some opportunities to run the football well but we had some missed assignments.”

The loss dropped the Lights to 0-6 on the season and in the Frontier Conference. With the win, Carroll improved to 3-3 and have now won two games in a row. The Lights are just past the halfway point of their season but have yet to pick up a win. But while he believes the Lights took a step back against Carroll, Rolin believes his players have the ability to recover and move forward.

“(We got) to take the film, learn from it and execute at a higher level. It’s that simple,” Rolin said. “I think we took a step back this weekend but we’ve got to move forward. We got to continue to fight, and I think our guys will.”