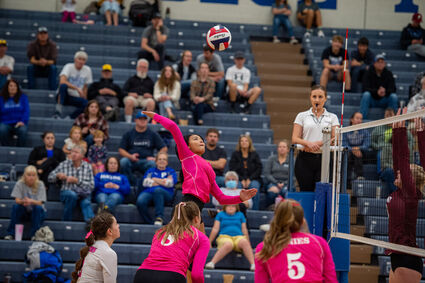 Havre's Kyanna Jarvis gets ready to spike the ball against Sidney last weekend at Blue Pony Gymnasium. The Havre High volleyball team will compete in Blocktober Fest this weekend in Butte where the Blue Ponies will play eight different schools.

The Havre High volleyball team fought through conference play the past month and a half and emerged on the other side with a 10-1 record. Now, the Blue Ponies face a long weekend when they head to Butte for Blocktober Fest starting this Friday. While many teams will try to hand the Ponies their first loss in over a month, HHS head coach Stephanie Huse is focused on getting her team ready for the long weekend.

"It's more about sharpening our minds when it comes to tournament play and then being able to have exposure to new teams," Huse said. "We're really gearing ourselves up for new competition and then just how we handle that within the tournament system."

Billings Central will be the only team the Ponies have already faced this season as they previously played each other in the tip-off tournament in Sidney back in August. Havre and Billings split the first two-set match they played before Billings defeated Havre in the tournament championship match, 2-0. All the other teams the Ponies will face Friday will be first-time opponents this season. Through the course of the day, Havre will play Butte Central, East Helena, Florence, Jefferson, Ronan, Stevensville and Whitefish.

"I expect all of them to be pretty competitive and tough," Huse said about all of Havre's opponents. "They're all going to be bringing their own toughness and their own strategies which will be new and fresh to us."

Since Havre has only played one of the teams that will be in Butte this weekend, Huse has not gotten the opportunity to see what most of the competition looks like. However, she believes that if her team focuses on running their system smoothly, the Ponies will be competitive this weekend.

Over the past four weeks, Havre's matches were spread out as the Ponies played around two matches a week. While their number of matches will be ratcheted up this weekend, the Ponies look forward to the change of pace.

"They're excited about it," Huse said. "At this point in our season when we're used to playing our conference matches a couple times each week it can start to become monotonous and repetitive and so being able to play in a tournament with a different format. There's some excitement to it for some change."

The high school volleyball postseason is set to start at the beginning of next month so Havre only has a few weeks to get themselves ready. With so many games against different opponents this weekend, Huse believes it can be a good opportunity to mentally prepare for the postseason.

"We're setting ourselves up for a tournament and making sure that we're taking each game, game by game," Huse said. "Not getting too far ahead of ourselves. Not worrying so much about what we're facing or when we face them. It's just what are we doing right now."

HHS volleyball will begin playing in Blocktober Fest in Butte Friday at 9 a.m.