Krista Solomon retires after 20 years with the Boys & Girls Club of the Hi-Line, 30 years with HELP Committee

Brurud takes the lead as club continues to expand 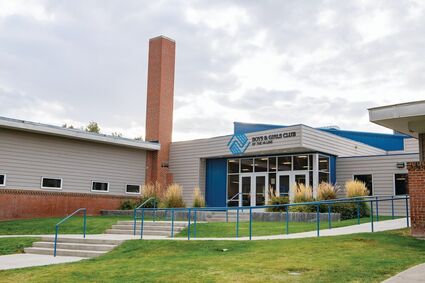 Boys & Girls Club of the Hi-Line stands on the 500 Block of First Avenue Thursday. The club is under new top leadership, with 17-year executive director Krista Solomon retiring at the end of last month and club Director Tim Brurud taking over as executive director.

The Boys & Girls Club of the Hi-Line recently saw the departure of their executive director of 17 years, Krista Solomon, a driving force in the creation of the club back in the early 2000s, who retired at the end of last month.

Solomon said that after 20 years with the club, and 30 with the HELP - Havre Encourages Long-Range Prevention - Committee, she is ready to open the next chapter of her life, but can look back fondly on the past decades.

"Crazy to think that this next summer it will be 20 years and I have no idea where they've gone," Solomon said.

She said she and her husband, Havre Mayor Tim Solomon, had always planned to retire together, and with his leaving office at the end of this year she's looking forward to spending more time with her family, including her children, grandchildren, parents, sister and extended family.

Outside of spending more time with her family, Krista Solomon said, she has plans to have no plans for retirement, though that will likely change at some point.

She said despite her retirement from her role as director she will likely be a fairly common sight around the club, helping with events like this year's Festival of Trees.

20 Years of the Club

Solomon said the HELP Committee was formed in the late '70s with the help of an anonymous donation from an area grain farmer who felt there was a need in the community for an organization to better educate young people about the effects of drugs and drug use, which has been the committee's purpose for more than 40 years now.

Solomon got involved with the committee immediately after moving to Havre and graduating from Northern Montana College, now Montana State University-Northern, and, since then, the committee and the club have been her entire working life, one that has been engaging and enjoyable.

"I tell people often that you should get into a career where you never work the same day twice," she said. "... It was never boring and it was always challenging. It was a wonderful ride."

Over the years, she said, the committee has received plenty of funding from the state and federal governments, but until 2001 never had a facility, and at the suggestion of then committee member Doug Kaercher, who will take Tim Solomon's place as Havre Mayor Jan. 1 2022, they began work on setting up the club.

Krista Solomon said the club's creation was the culmination of countless people's passion and hard work and credited its rapid expansion to them and the people of the Hi-Line.

"I credit the community as a whole," she said.

When the club first opened in July of 2002, she said, the goal was to have 200 children signed up in the first year, but that goal was reached in less than six weeks. In the years that followed, the club would accrue over 4,200 member sign-ups.

She said it was overwhelming to see that kind of growth happen so quickly.

Solomon said the club's building, formerly the Devlin School Building, had parts of it leased to them by the Havre Public School District at first, but because the club grew so quickly they had to expand through more of the building than originally planned, leasing more and more until the state implemented all-day kindergarten.

After that, the school district had to take back part of the building but, shortly after expanding Highland Park Elementary School to accommodate the students, sold the building to the club outright, for one dollar.

Even then, Solomon said, the club eventually had to put a cap on signups because it was becoming so popular, so the club built an expansion of its own and began an endowment to better sustain the their activities.

She said the incredible success is thanks to so many people including long-time board members, staff, community partners and donors.

She said it's people like them that have made her decision to leave that much easier, knowing that the club will be in good hands.

"The time to end this chapter seemed as right as it could be," she said.

In addition to people like Mary Jane Borlaug and other long-time boardmembers, Solomon said, the McIntosh and Kaercher families in particular were vital to the club and the committee's activities, with Lloyd and Audrey Kaercher, later revealed to have been the original anonymous donor back in 1979, being some of the biggest donors after the club's endowment was set up.

Solomon's long-time coworkers and colleagues still at the club agree that it was a collective effort bringing the organization into being, but said she was the driving force behind the club after the initial plans had been laid.

Tim Brurud, who has taken Solomon's place as executive director of the club and who had worked with her for the past 19 years as director of the club, said after the preliminary plans for the club were made she did the boots-on-the-ground work of setting up projects, forming groups, arranging transportation, outreach and working to make sure the club actually got off the ground and met the vision set out.

Brurud said Solomon was a great mentor to him, and always cared about the club's employees and worked to make sure they reached their full potential.

He said it's hard to see her go after all this time, but he's happy she'll be able to spend more time with her family.

"It's kinda bittersweet," he said.

HELP Committee Tobacco Prevention Specialist Jay Schuschke, who has also worked with Solomon for nearly two decades, was similarly complimentary, calling her "the best boss I ever had."

Schuschke said the club has filled a vital role in the community since its creation, as evidenced by its rapid expansion, and working alongside a person of such competence and integrity was an honor.

"I don't want to make it sound like cheap gushing or hyperbolic, but it's true," he said. "It was terrific working with her."

He said it's tough to see Solomon go, but he's confident that Brurud will prove a worthy successor and will provide the leadership the club needs.

"If Krista had to go, we're delighted that Tim is here, and we're happy she's been able to retire," he said.

Long-time employees weren't the only ones to praise her time at the club.

Havre Public Schools Superintendent Craig Mueller said he was involved with the club as a member of the Substance Abuse and Misuse Committee, which Solomon asked him to be on years ago as a representative of the school district, and now works to maintain the district's community partnership with the club.

Mueller said he always had a good relationship with Solomon who did an admirable job keeping in touch with the district and addressing the needs of its students.

He said the partnership between the two entities has always been strong, but especially lately their relationship has been great.

He said the two entities worked together as the district was developing its reopening plan during the pandemic, to make sure there was synergy between the district and the club and make things as easy as possible for students.

Mueller said if it weren't for the club there would be a lot more pressure on many parents in the area and the organization has been a great help for the district and larger community over the years.

He said he wished Solomon the best in retirement and thanked he for doing such a good job.

The Future of the Club

Brurud said his transition into Solomon's role has been very smooth, in no small part thanks to her willingness to help him into it and provide advice and guidance in his first few weeks on the job.

He said his vision for the club isn't radically different from what it's already doing, but they are looking at expansion as the club and its programs continue to grow, including possibly opening another location.

"It's been a good ride, and we look forward to keeping it going," he said.

Solomon said expansion is becoming increasingly necessary, something that the pandemic revealed to them these past two years.

"We learned a lot through COVID," she said. 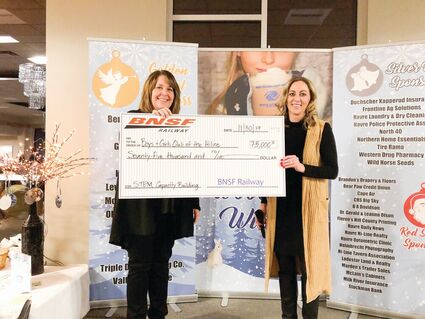 Boys & Girls Club of the Hi-Line Executive Director Krista Solomon, left, accepts a $75,000 check from BNSF Railway Public Affairs Director Maia LaSalle Nov. 30, 2019, in the Boys & Girls Club of the Hi-Line during the club's annual Festival of Trees fundraiser. Solomon has retired from her position after 20 years with the club, 17 as executive director of it and the Havre Encourages Long-Range Prevention Committee, where she worked for many years before taking that position.

She said the pandemic forced the club to operate with children in smaller groups and they found they were able to connect with them much more effectively under those circumstances, and conversations are happening at the club about how to expand in a way that maintains this approach.

While she's no longer the executive director, Solomon said, there are exciting things coming up for the club including this year's Festival of Trees, which has obtained a record number of sponsorships this year, and she's hoping will be held in person.

She invited everyone in the community to get involved in the organization whether that means volunteering, hiring on or becoming a donor.