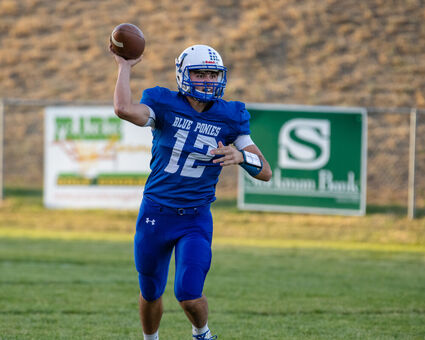 Havre's Trenton Maloughney throws a pass against Miles City last month at Blue Pony Stadium. Maloughney is one of several seniors that the Havre High football team will honor tonight when they play Livingston in their final home game of the season.

While the past few weeks have been rough with four straight losses, the Havre High football team will have much to celebrate tonight with its senior night. At Blue Pony Stadium, the Blue Ponies will play Livingston in their final home game of the season. As the Ponies play one last time in front of their home fans, HHS head coach Ryan Gatch looks forward to honoring his senior class.

"Excited to celebrate our seniors," Gatch said about the night. "They've given a ton of commitment and perseverance this year and they're excited to showcase themselves in front of the homestand fans."