Once an All-American defensive end for the Lights, Kino Detrick has returned to his alma mater as a coach 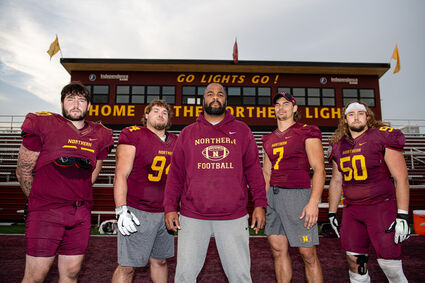 MSU-Northern defensive line coach Kino Detrick stands with some of his lineman at Tilleman Field after a Northern practice last week. Detrick was an NAIA All-American for the Lights, and years later, is helping Northern's defense grow. The Lights host NCAA Division II Simon Fraser in a non-conference game Saturday at 1 p.m. inside Tilleman Field.

As the Montana State University-Northern football team tries to make a jump this season, they have made some additions to their coaching staff to help them do so. One addition to the coaching staff this fall is Kino Detrick as the team's new defensive line coach.

From 1999-2002, Detrick played for the Lights as a defensive end, so returning to coach in the program is a dream come true.

"I had an opportunity to coach my alma mater and I couldn't pass that up. It had been a dream of mine to do that," Detrick said.

When Detrick originally played for the Lights, the program had just recently been brought back to life by the school after a 27-year absence. As a member of the new football program, Detrick had experiences he will never forget.

"It was great. Met a lot of guys I still talk to this day," Detrick said. "It was amazing. Best time in my life."

During his time in the program, Detrick made an impact on the field. He was a three-time All-Conference player, two-time First Team All-Conference and one-time Second Team All-Conference. In 2001, he was named Honorable Mention All-American. During that season, he led the Frontier Conference with an MSU-N record 11.5 sacks. As he earned all those accolades, Detrick learned a lot that has helped him in his coaching career.

"To be mentally tough," Detrick said he learned during his time playingmfor the great Walt Currie. "Wanting to be better every day. Compete to be better."

In his first year coaching for MSU-N, Detrick has enjoyed getting to know his players. He is now getting the chance to work with defensive lineman Pat Hammond who was Second Team All-Conference defense last season. Detrick also gets the chance to coach seniors Justin Pfeifer and Joe Fehr on the defensive line. Even though it is his first year coaching these players, Detrick says he has quickly grown close with the unit.

"It's been great. Got a great bunch of guys," Detrick said. "All the guys on that defensive line, they all took me in and we just bonded right off the bat."

Detrick is originally from Great Falls, going to GFH before he attended MSU-N. After he graduated from college, he decided to stay in Havre and has started a family here. In his spare time, he enjoys spending time with his wife Cortney, his sons Kellen and Ryker Donald Walt Detrick and his dog Bain. During his time in Havre, Detrick appreciates the support he and his family have gotten from the community.

Football is a family affair for the Detricks as Kellen has followed in his father's footsteps. At Havre High, Kellen played defensive end and tight end for the Blue Ponies. In his senior year, he was named all-state as a defensive end and first team all-conference as a tight end. During his time on the HHS coaching staff, Kino got the opportunity to coach his son through his high school career.

"It's everything to me," Detrick said. "Coaching my son, that's a once in a lifetime opportunity. Hopefully I get to coach my other son the same way but watching Kellen grow and become the guy he's grown into is really something special." 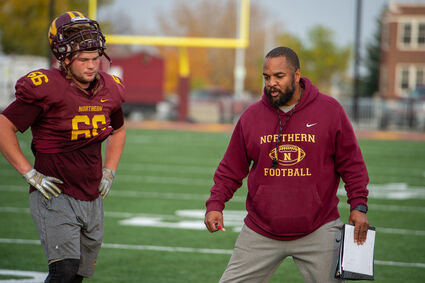 Montana State University-Northern's Kino Detrick talks to players during a recent Northern practice at Tilleman Field. Detrick has returned to Northern as a coach after a highly-successful playing career with the Lights, and a stint as an assistant coach for the Havre Blue Ponies. The Lights host Simon Fraser Saturday,

Kellen is now in his freshman season as a member of the University of Montana football team. He committed to play for the Griz as a defensive lineman over offers from Montana State University, Northern Arizona and Northern Colorado. As his son begins his own collegiate career, Kino is proud to see him joining a strong football program.

"That makes me a very proud father," Detrick said. "Watching him realize his dream come to fruition is something that (shows) hard work does pay off."

With MSU-N, Detrick wants to help his players, and the team reach their dreams too. In this new stint with the Lights, Detrick hopes he can help build a culture that will eventually lead them to success.

"Set a foundation. The old way still works, you come to work every day and you try to get better," Detrick said. "Just keep grinding and good things will come. We're right there."

That's exactly what Detrick learned and did as a Light when he was a player many years ago, and now, he's happily paying it forward.