Havre's Dani Wagner has become her own success story 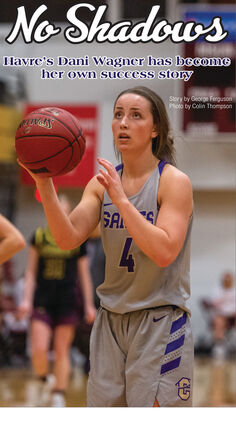 It's hard to imagine Havre High athletics, and not know the last name Wagner. Spanning more than a decade, the Wagner name, and Blue Pony athletics were synonymous. And by the time the youngest of the Wagner's, Dani, got to HHS, it was conceivable that there was a big shadow cast by all of her older siblings' previous success.

And yet Dani, now an All-American senior basketball player at Carroll College, never saw her family's successes at HHS, including her mother Mary's long run as an outstanding math teacher there, as a burden. She never looked at it as having big shoes to fill, or pressure. Instead, she did nothing but embrace her time as a three-sport standout, playing volleyball, basketball and softball, as well as becoming an honors student.

"It was nothing but fun," Wagner said of her Havre High years. "Those are truly some of the best memories and years of my life. I love Havre and the people. Having my mom as a teacher throughout high school was the coolest experience. She is one-of-a-kind and I still occasionally have to call the "math hotline" for some extra help. I never really felt any pressure even though my siblings were successful. We all created and went on our own paths, and thankfully my parents were great supporters with each decision we chose to make for ourselves."

Nothing could be more true. Dani certainly carved out her own path at HHS, having been an All-State player in all three sports, and winning a state championship in basketball with the Blue Ponies. And instead of feeling any pressure to fill the shoes of her older brothers Gary and Billy, who were part of state champion football teams, wrestling teams and tennis teams at HHS, she learned from them, and got the ultimate support from them as she embarked on her own athletic career.

"I looked up to them more than most people can probably even imagine," Wagner said of her two older brothers. "Truly, it goes back so far. Watching them throughout their careers, going to all the football games, playing basketball in the backyard, football catch in my front yard, getting beat up on just to make me a tiny bit tougher, walking over to the tennis courts to hit around, all the little things really are what got me to the point I'm at today. Being the youngest child can be a difficult spot to be in, but for me, it has been the best way to grow. They were both so successful and seeing Gary as such a confident guy has inspired me to just have a little more confidence in who I am. Whereas Billy was always a bit more quiet but the talent he has is unbelievable. He has and always will be such a passionate, and motivating person in my life and that has helped me to become a better individual and teammate."

That's been the Wagner way. They are a close-knit family, and Dani has had a special relationship with all her brothers, and sisters Lisa and Julie as well. However, the bonds with Gary and Billy growing up, because of the proximity in age, seemed to be extra special, and they're bonds that Dani considers some of the biggest influences on her life, on the court and off it.

"I honestly feel so blessed to have as connected a family as I have, but I would say I am very close with Billy and Gary, specifically," she said. "They are the biggest supporters of both my academic and athletic career both here at Carroll and throughout my high school career as a Blue Pony. There truly wasn't a game where I did not have someone in the stands watching me, and giving me the post-game advice/hug that is so important. I know Gary has mentioned it often, but he truly is "living vicariously through me" at this point and it's pretty amazing to have someone as successful as he, who really understands the commitment to athletics."

The Wagner legacy at Havre High was special and will never be forgotten. But, eventually, Gary and Billy found their way to Carroll College, and ultimately, the legacy was built there, too, culminating with the 2010 NAIA national football championship in which Gary was the starting quarterback, and had several highlight-reel plays, while Billy was a wide receiver for the Saints.

And while Dani, like so many other youngsters in Havre, grew up loving MSU-Northern basketball, and other Northern sports, it was during the times watching her older brothers play football at Carroll, that her own desires to become a Fighting Saint were born.

"I always dreamed of being a Fighting Saint after watching my siblings achieve success here. It made me want to go there even more," she said. "However, Havre will always hold a very special place in my heart. Coach (Chris) Moaut has truly been one of the most giving, supporting and dependable people I have ever met. He has helped me throughout my basketball journey in college and that definitely made my decision after high school more difficult. I would have loved to play for him, and in front of the Havre crowd but I knew my heart was with Coach (Rachelle) Sayers and the prosperous basketball programs she has created over her years.

Of course, going to Carroll meant following in Gary and Billy's footsteps, again. But again, Dani didn't see it that way at all, and through time, she's completely made her own legacy at Carroll. She's already a three-time Frontier All-Conference performer for the Carroll women's basketball team, she's a two-time All-American, an Academic All-American, and today, is simply one of the best players in the Frontier Conference.

"It's an honor, (to follow Gary's career at Carroll), but I credit so much of my achievements to the people along the way," Dani said. "Coach Kraske, Coach Bob (senior) (Evans), Cory Gunderson (Gundo), Coach Sayers, Coach Moaut and obviously my family/host family and teammates along the way. Without all of those people, none of this stuff would even be possible. I am grateful for the connections I have made in my life over the past 23 years."

Indeed, Dani's parents have certainly had a huge impact on her life as well, and while they, too, have been big Northern fans all their lives, the transition to watching their kids prosper at Carroll has been one that has been nothing but pure joy over all these years.

"They love it. One more opportunity to travel around the country and watch me compete," Wagner said. "I don't think they would be having as much fun if they had one relaxing weekend at home. It's driving thousands of miles to watch me play that makes their lives so exciting. Along with that, having my uncle (Jerry Wagner) as a volleyball coach up at Northern has been so awesome for my parents. They love going up and supporting the Lights and Skylights, and I think at the end of the day, they will always love both Carroll and Northern equally."

Love. That's certainly what drives the Wagner family, and it's also what has driven Dani to succeed in sports over the years. She's a competitor, and true warrior on the floor, and it's one of the many things Gary admires about her.

"Tough to tell you what I admire most about Dani," Gary said. "There are just too many things. I admire her faith. Her love for her family and friends. She is legitimately my role model. No lie. I absolutely love watching her compete. She came to Carroll and had a lot of work to put in if she wanted to earn time on the floor. Well she did that. She spent countless hours in the weight room and perfected her craft on the floor. She worked for it. She was never given a thing. She is a perfect example of what student-athletes should be. A great teammate. A great leader. Coachable (a very important trait these days). Never misses class. Never misses practice. Always puts in extra time. She is never satisfied, period. She wants to be better at everything. She has accomplished so many things in her career and received piles of awards and yet she wants more. If she wants to get a rebound no one will stop her. If she takes it to the rack good luck defending her. Her shooting is lights out, yet at the same time she is the most unselfish player on the court. Pretty great qualities. She is an All-American basketball player. An All-American sister and daughter. I am so proud of my little sister and no matter what this season holds, she is my favorite athlete of all time. Plus, the most athletic Wagner."

Those are special words considering the legacy that Gary, and the rest of the elder Wagner's created before Dani even arrived at Havre. And yet, the youngest Wagner certainly;y deserve the praise, because she has truly been that good, in all that she does.

And she's not done yet.

Wagner could have moved on after last season, but, because of COVID-19 granting an extra year of eligibility to all student-athletes who were in college in 2020, she returns to Carroll for one more crack at the NAIA national championship, something she and the Fighting Saints have been chasing during her entire, special journey in Helena.

"I felt like we left a lot out on the table and the team we have this year is more experienced and more ready to roll than any team I have had the opportunity to play on before," Wagner said. "We talk about being better and different often, but this year our commitment to that motto is more important than ever before. We had four of our five seniors come back for an additional year because of COVID and I think that says a lot about our program as a whole, and Coach Sayers. I know we have the potential to do something big and it is about putting all the little things together and doing it right." 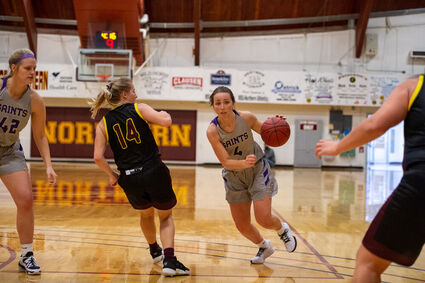 Dani Wagner is one of the best players in the Frontier Conference.

No matter what happens on the floor this winter, though, Dani has already done many big things with her athletic career, her academics and in life. In other words, like her parents have done, like all her siblings had done previously, now Dani's legacy is also cemented. And it's rooted in the same principles that have always been there, family, faith and a fire-driven passion to compete. That's what Dani saw growing up, and that's what she's become in her own right - and who she is today is someone she is very proud of.

"I am very proud of who I am today and what I have done individually throughout my past years at Havre High and Carroll," Wagner said. "I know that my family being as connected as we are has been extremely prominent in making my career a positive and successful one, but I also know that some decisions were guided by the big man upstairs and without all of these things, I know I would not be where I am today. I do not regret any decisions made up to this point and I am honored and lucky to be given one more opportunity to do something special at Carroll College."