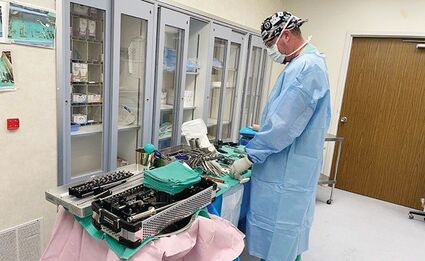 Northern Montana Hospital Scrub Technician Mark Dilley prepares instruments for surgery. Northern Montana Hospital Chief of Staff Dr. Kevin Harada said the surge of hospitalizations due to COVID-19 has made cutting back on non-essential services like elective surgeries has had to become a nearly daily conversation at the hospital. Harada said they haven't had to cut back yet, but he is concerned that they may need to if things get worse, which remains a distinct possibility. Hill County had 14 residents hospitalized as of the county health department's COVID-19 update Monday, with three Blaine County residents with COVID-19 hospitalized. Harada said Northern Montana Hospital has taken care of patients with COVID-19 from several other Montana counties and even from out of state.

Northern Montana Hospital Chief of Staff Dr. Kevin Harada said the hospital has been extremely busy, to the point where cutting back on non-essential services has had to become a nearly daily conversation.

Harada said they haven't had to cut back yet, but he is concerned that they may need to if things get worse, which remains a distinct possibility.

"Some days have been closer than others," he said.

He said Northern Montana Hospital staff frequently need to be reallocated and work more shifts to keep up with the massive number of hospitalizations they've seen due to COVID-19.

Harada said his team is maintaining, having dealt with this issue for so long, but they are being strained, and the massive workload, which hasn't let up in more than a month, hasn't been doing their morale any favors, especially knowing that their colleagues around the state aren't doing much better.

"It's very fatiguing, but we're finding ways to push through. Operating at this level for this long is tough," he said. "But we know that our partners in Billings and Great Falls - we're not alone in this."

He said the hospital has certainly seen its share of busy times over the years, but he's never seen a single ailment dominate Northern Montana Hospital to the point that COVID-19 has, and the situation has required them to ask more from their staff than ever.

"Seeing wave after wave of people coming in makes the job tough," he said.

Surge continues to strain the state and public health

Harada said said under normal circumstances Northern Montana Hospital serves people as far east as Phillips County and as far south as Big Sandy, but recently they've been seeing people from across the state, and even out of state.

He said they've been accepting patients from as far away as Idaho and North Dakota because there just weren't any beds available closer.

"It's a long ways away to be looking for a hospital," he said.

Harada said Northern Montana Hospital hasn't had to turn away anyone from their normal referral area yet, but they have had to say no to some of these transfers of people from out of state because the hospital didn't have the capacity.

He said Hill and Blaine counties still make up the majority of people they see, and those local areas are being hit very hard by COVID-19.

The Hill County Health Department reports that in the last three days alone 25 new COVID-19 cases were reported - with some likely still to be confirmed - and 14 people are currently hospitalized. Two people died in that time.

Blaine County saw 18 new cases in that time and has three active hospitalizations.

Hill County Public Health Director Kim Berg, also the county's health officer, said that since the beginning of September, her department has seen a dramatic increase in cases, to the point where they are not able to get through all of the area's positive cases in one day.

Berg said this massive surge in cases has affected the ability of public health to do its job due to the workload, which has impacted the number of new cases they report daily.

"For instance," she said. "We may still have 20 cases to get a hold of on a Wednesday, but they will not be reported as new cases until they are contacted and an investigation is started.

"We are doing our best to keep up with the cases. I have three full-time staff members who work only on this, and other part-time staff who help as well," she added.

Berg said the effects of this overwork had been hard on staff, who have seen the pandemic drain their working lives of any enjoyment and exhausted them.

"The amount of work, lack of support, and the inability to see an end really affects everyone in the office," she said. "Office morale is not where it used to be. Work used to be fun and enjoyable, and at this point there really is nothing fun about our jobs. ... Hill County is beyond lucky to have the experienced public health workforce that we have, and we are doing everything we can to keep them here helping our community."

Blaine County is in a similar state, with transmission in the community still very high, and hospitalizations rising.

Blaine County Health Department staff has also been feeling the stress of the pandemic which is increasingly making their jobs much more intense.

"We are still attempting to contact every person with positive COVID-19 labs as well as every named contact," she said while still with the county. "That is harder as case numbers increase and the severity of the illnesses increase, resulting in hospitalization."

She said the department's activities have been focused on prevention of COVID-19 through general education, communication with sensitive populations, recommendations for people who believe they are cases and contacts and vaccination, activities that can not stop when case numbers increase.

The workload isn't the only thing making life difficult for public health workers during the surge.

Due, in part, to the proliferation of COVID-19-related misinformation, public health workers across the state and nation are facing increasing pushback from the communities they serve as well as from state and local governments, many of which have taken steps to reduce their authority.

McPherson-Hauer resigned from her position as Blaine County's public health nurse, saying it was because this pushback has created such a horrible work environment for people like her in public health.

"I'm a very proud public health nurse, and I think we did a really good job here, and I think that will continue. But the legitimate public health efforts have been undermined in enough ways that it has taken away our credability, while it shouldn't, because there are very good reasons for us responding in the way that we are." she said in a meeting of the Blaine County Health Board last month. "When we give good sources, evidence-based sources and research and data, that doesn't seem to matter to a large group of the population. Until that matters again, not just public health but a lot of professions will lose credibility."

On top of being constantly vilified and wrongly accused of incompetence by much of the public, she said, the politicization of the pandemic and the "knee-jerk" legislation passed in the last session of the Montana Legislature limiting her department's power has made it impossible for public health do to the things they need to to keep people safe.

Berg lamented McPherson-Hauer's resignation and everything that lead up to it.

"I know Jana very well," Berg said. "She is a great nurse, a very passionate public health professional and her resignation is a huge loss for public health in Blaine County and the state."

Berg said she completely understands and shares her colleague's frustrations with the politicizing of public health.

"The whole goal of our department is to protect and promote a healthy environment for the members of our community, and each one of us has gone through extensive training to learn the best practices, based upon sound science, to achieve this goal," she said. "We are now faced with an environment where our work has been politicized and our hands tied from implementing the public health practices that we know will protect our community. Those of us who are left in public health continue to do the best we can every day, but it is incredibly difficult to watch preventable infections and deaths continue to occur as a result of the COVID-19 pandemic."

Ongoing problems amid an ongoing pandemic

Harada said he's afraid this latest surge of COVID-19 may get worse before it gets better, and while cases in many states across the U.S. have seen a marked drop in case numbers, Montana may still have a way to go.

He said even if things do get better, and the delta wave burns itself out, there is always the possibility of another variant putting things right back where they started.

McPherson-Hauer said she expects the delta-driven surge to continue through the fall and into early winter, similar to the pattern in 2020.

Berg said, given the number of factors to be considered, it's certainly too early to predict whether there is a serious possibility of the surge winding down in the near future, and she would strongly encourage the public to seek out information on the pandemic from public health professionals who analyze the data on a daily basis.

Regardless of where the surge is headed, Northern Montana Hospital and other health care institutions in Montana are still dealing with a number of compounding problems that are making the pandemic harder to deal with.

Harada said while Northern Montana Hospital is generally faring well with testing supplies, the U.S. is still seeing a shortage of many medicines used to treat COVID-19, leading to increasing concern about resources, human and otherwise.

In her own county, McPherson-Hauer said Blaine County health care providers continue to give reliable care to residents, but the system is undoubtedly being strained.

But more than that, the problem of an under-vaccinated population continues to be the primary driver of the strain seen by health care institutions like Northern Montana Hospital, Harada said. 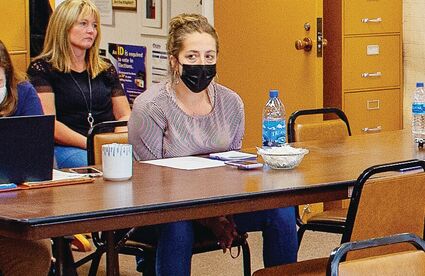 Blaine County Public Health Nurse and County Health Officer Jana McPherson-Hauer listens Sept. 22 during a meeting of Blaine County Health Board. McPherson-Hauer announced her resignation that day effective Oct. 15. She cited pushback mainly due to politicization of and misinformation and disinformation about COVID-19 and the vaccines to prevent the disease making a horrible work environment in public health.

Of all hospitalizations, more than 90 percent of them are people who aren't vaccinated, he said, and those who are unvaccinated are getting much more ill.

"We have seen some breakthrough cases over at the flu clinic, but they are just not needing to be hospitalized," he said.

Harada said the hospital is also seeing younger and younger people getting hospitalized, with people in their 30s and 40s coming in almost every day, most of them with no underlying conditions, when last year it was a rarity.

He said the hospital is continuing to push people to get vaccinated, which he, and virtually the entire scientific community, have said is the only way COVID-19 is ever going to go away.

Harada said the vaccines are safe and effective, and the fact so many are ignoring or refusing such an easy solution despite the health care community's efforts is distressing.

"It's mind-boggling to me," he said. "It's just hard to understand."