Frontier Notebook: The last four weeks in the Frontier shaping up to be wild 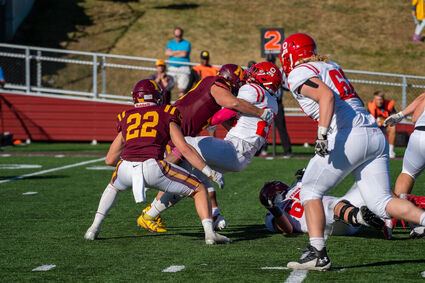 Montana State University-Northern's Dylan Wampler hits the Simon Fraser ball carrier during Saturday's game at Tilleman Field. Wampler had a huge game for the Lights and earned Frontier Player of the Week honors.

The bye week is over, and the Frontier Conference now comes down to the last four weeks of the season.

And things couldn't be any closer.

Rocky Mountain College carries a one-game lead into this week, with a 5-1 record as the Battlin' Bears host Carroll College who is tied for fourth with Eastern Oregon and Southern Oregon at 3-3. Meanwhile, Western and College of Idaho are tied for second at 4-2, and neither team can afford another loss.

The league is Rocky's to lose, as the Bears also visit Tech, host Northern and then travel to Western to finish the season. Meanwhile, Western and CJI...