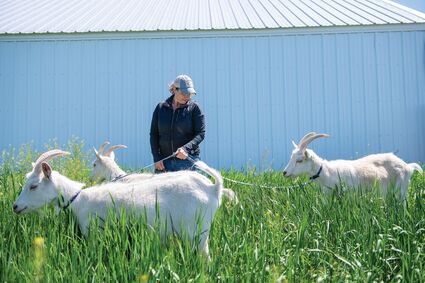 Crystal Manuel holds the leashes to three Saanen goats she is training to be pack animals.

If you're taking in the sights at Beaver Creek Park one of these days and see a woman hiking along with a white goat or three carrying packs, it's likely to be Havre-area resident Crystal Manuel, who has been training the young goats to be pack animals.

"This particular breed (Saanen) is often referred to as the gentle giants. They're very, very docile. ... Goats are more like dogs," Manuel said.

Standing next to a two-horse trailer with the phrase "No goats no glory" hand painted on the back, She laughed after being asked what motivated her to get into pack goats.

"Craig's List," she said, blaming a late-night perusal of the online classified ad site for starting her down this path seven or eight years ago.

She said a man was selling four older, well-seasoned pack goats, four full sets of packs and the trailer for $800, and she had committed to buying them before the sun came up.

"It was just too good of a deal to pass up. I'd thought about pack goats in the past - I had llamas prior," she said, adding that she much prefers her goats.

Her current three young goats are the same white Saanen breed as her original ones. The breed originated in Switzerland. The standard for male Saanen goats is to grow to about 3 feet tall at the wither, which is the highest point of the back above the shoulder.

Manuel said, though, that her first four Saanen pack goats were taller than that.

The Saanen does are valued as one of the greatest milk producers of all goat breeds. And while the breed's wethers, which are the castrated male goats like Manuel's, cannot participate in the production of milk nor in the production of more does that can make milk, they have found their niche in the world as pack goats - because, even if you've never heard of it, pack goats are a thing.

The American Goat Federation, a U.S. goat producer advocacy group, says goat packing was made popular in the U.S. in the 1980s and 1990s by John Mionczynski of Wyoming.

Montana Fish, Wildlife and Parks Information Education Manager Marc Kloker said the only regulations on using goats for packing on state and federal lands are those that apply to other livestock use, such as horses, mules and llamas, including using weed-free hay in designated areas.

Goats are great for packing, Manuel said, because they are in their natural element in the rough terrain, are herd-oriented and are easy on the ecosystem.

"Goats will follow even without a leash and this allows them to find the best route for themselves," she said, adding, "They are the most 'foodie' critters. ... They're browsers not grazers by nature, so they'll eat a little of everything nutritious, but instinctively don't eat poisonous plants."

Last year, Manuel said, her goats Monte, Rocky and Alpine were babies, so they just followed loose behind her on their hikes in the park, learning to follow and to keep up, but this year they are old enough to start carrying packs and a little bit of weight.

Once full-grown and in condition, they'll be able to carry up to 25 to 30 percent of their about 180-pound body weight.

With their smaller training packs on back order, Manuel demonstrated this summer how goats are tacked up with the pack saddle and pannier bags. It was the first time Monte had been tacked up, and the full-size bags hung close to the ground. Beyond a few suspicious looks, he took it all in stride and soon walked out with the bags dragging through the grass tops, stopping only to graze and get petted.

Manuel said that once the training packs arrive, she'll take the goats on short hikes gradually increasing the weight they carry over the summer. By the end of next summer, they will have pretty much reached adult size, she said, and eventually will get fit enough to carry around 45 pounds, depending on their fitness and size at maturity.

Typically, the male goats will grow to about 180 pounds in size, she said, and their horns will continue to grow some. They can get a little awkward, like when a goat turns its head and the horns swing around and run into things or people, but they aren't dangerous.

"Like any new pet," she said, "there's all the new things you have to learn and know about their health and their care and their temperaments - that's the big thing with goats."

People can get into packing with the goats if they put in the work researching and training, themselves and the goats, Manuel said.

She and her husband, Jody, have an organic farm and ranch south of Havre, growing ancient grains along with raising market cattle and a few pasture-raised pigs. 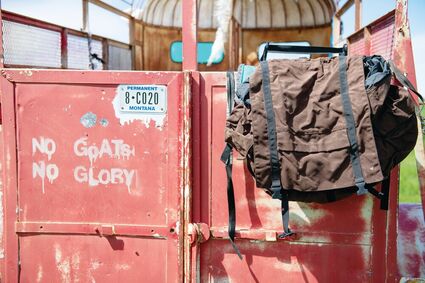 A sign on the back of a trailer expresses Crystal Manuel's dedication to packing with her goats.

"When your livelihood is dependent upon selling livestock, it's fun to know that I have something that's going to stay here," she said. "Plus, too, you can see that they really are more like pets or dogs than anything else."