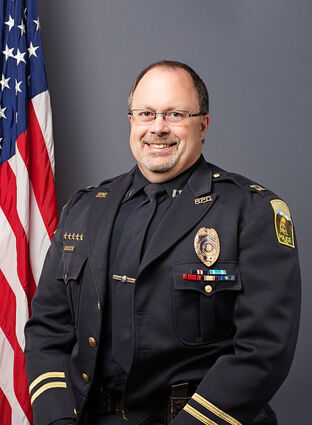 On the evening of October 15, 2021, Curtis Eugene Stinson transitioned from his earthly service to his family and the Helena community to serve as a warrior for our Lord after a valiant fight against cancer.

Curt was born November 5, 1971, in Havre, MT to Howard "Gene" and Sharon (Johnson) Stinson. He grew up in Havre, attending the Havre Public Schools and graduating from Havre High as valedictorian in the spring of 1990. He spent his youth in Cub Scouts and Boy Scouts, achieving the rank of Eagle Scout. During high school, Curt participated in the Explorers program, which established in him a passion for law enforcement, setting the stage for his future career.

Curt attended Montana State University, where his life-long love of Bobcat football was cultivated. While at MSU, Curt worked as a resident assistant (RA) and as an assistant resident director. It was while working as an RA that Curt met his future wife, Christine. Both RAs, the two met in September 1992 when Curt's first move was to try and toss Christine into the fire pit. They started dating soon after and were married in the summer of 1996.

Curt graduated with honors from MSU in the spring of 1994 with a degree in sociology with an emphasis in criminal justice. He began his professional career in January of 1995 when he started with the Helena Police Department, a department he stayed at until his death. Curt rose through the ranks of the Helena Police Department; from senior officer to corporal to sergeant to lieutenant to captain and finally as assistant chief of police. Curt served as a field training officer and trained new officers coming onto the department. He assisted with the acquisition of the first two K-9s and oversaw the dispatch center remodel and move. Curt was proud to be an officer and took the responsibilities of his profession very seriously.

The joy of Curt's life was his family. Curt and Christine were blessed with three incredible children, Brandon, Danielle, and Taylor. To say that Curt was a proud father is an understatement. Curt lived for his kids and spent hours watching them in their sporting endeavors, from baseball to gymnastics to cross country to track to volleyball to softball. He was the parent yelling at the bad calls and being shushed by his family. He was always ready with a not-so-clever dad joke and spot-on advice for any situation. Curt taught his children to stand up for what they believe in, to be strong in their convictions and to love unconditionally. He was fiercely proud of his children and their activities and the choices they have made in life.

For Curt, time with family was sacred and they could be found during the summers camping somewhere there was no cell service, where Curt would cook way too much food and kick back in his camping chair and read all day. He loved to sit under the camper's awning and watch it rain through the trees. Camping time was also cribbage time, endless and competitive hands of cribbage were played while camping. The family also went along on his many adventures to ghost towns and baseball games (Go Cubbies). Curt was an avid Bobcat fan and on Saturdays in the fall, he would be at Bobcat stadium or watching the Cats play on TV. Curt was forever finding home improvement projects. "Garage days" were epic, primarily because they involved working on everything from repairing vehicles to outdoor projects, anything Curt didn't want to pay someone to fix. But these were times spent with the kids, telling stories, discussing life, and just hanging out together.

Although Curt didn't like attention focused on him, he worked tirelessly to make this community better. Curt served as a Cub Scout den and pack leader as well as a Boy Scout leader. He greatly enjoyed the adventures to camps with the boys every summer, including being very proud to attend Boy Scout Camp with his son Brandon. Curt served his community in other ways as well, from reading to kids at the library to helping raise awareness for breast cancer. The Explorers program was something very important to Curt, and he was proud of his work to establish a successful program in Helena, one his son was able to participate in.  Curt's faith was important to him and he was very active in his church.  He was a long-time member of New Life Lutheran Church, serving many years on the church council and wherever he was needed.

Curt was preceded in death by his father, Howard "Gene" Stinson.

The funeral will be held on Monday, October 25th at 11:00 a.m. at the Lewis and Clark County Fairgrounds. Attendees are encouraged to wear blue or MSU Bobcat attire. Interment will take place in Havre, MT, at a later date in a private family service.

Please visit http://www.aswfuneralhome.com to offer a condolence to the family or to share a memory of Curt.