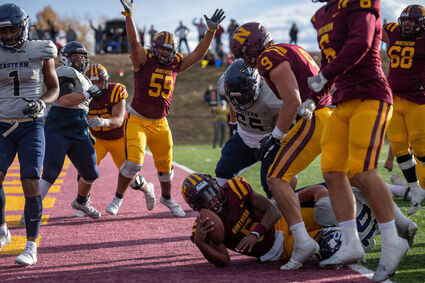 Montana State University-Northern's Kaymen Cureton scores what would be the game-winning two points in Saturday's wild, five-overtime game between the Lights and Eastern Oregon at Tilleman Field.

A comeback win in overtime, breaking a streak, and so many other fasctors were special to the Montana State University-Northern Lights Saturday at Tilleman Field.

And the 22-20 win over Eastern Oregon should be especially sweet for quarterback Kaymen Cureton after the past few weeks. Coming into the season, the transfer quarterback from Eastern Kentucky won the starting job against three other quarterbacks.

Cureton started the first five games of the season for the Lights but was unable to lead them to victory. After a poor performance in the first half against Montana Tech earlier this...