IN A WILD OVERTIME GAME, LIGHTS BREAK FRONTIER LOSING STREAK WITH A SPECTACULAR WIN OVER EOU 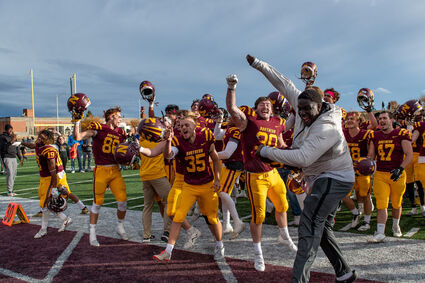 The Montana State University-Northern Lights celebrate after beating Eastern Oregon in a five-overtime game Saturday at Tilleman Field. The 22-20 victory was Northern's first in its last 48 games in the Frontier Conference.

The dreaded streak is no more.

It had been a long five years since the last time the Montana State University-Northern football team had won a Frontier Conference game. The Lights had been close to breaking through in the shortened spring season and this fall, but were not able to get over the hump.

But the Lights finally broke through for a 22-20 win over Eastern Oregon University at Tilleman Field Saturday. And it only took them five overtimes to do it.

"It just shows the resilience of this team. Anyone could have given up right there, not this team. This team is tough. This team's re...