George Ferguson Column: Congrats Lights, not only on the win, but for never quitting fighting for it 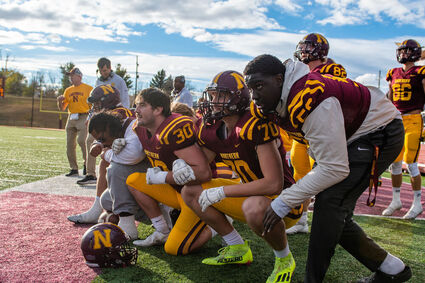 Montana State University-Northern players wait in anticipation of the final play during last Saturday's five-overtime thriller against Eastern Oregon at Tilleman Field. The Lights' 22-20 win was their first against a Frontier Conference foe in five years. Northern will try to make it two in a row Saturday when they host Montana Western.

It kind of felt like it had been building. You could just feel like something was going to happen. And then, just like that, the Montana State University-Northern Lights lost a really difficult game to Simon Fraser University.

And what seemed like a season in which the Lights were headed in the right direction, might have been all for not.

Except, somebody apparently forgot to tell the Lights that.

Instead of sulking and mailing in what has been another really tough season, Northern rallied. And the result was one of the most impressive wins in recent MSU-N history when the Lights upende...