Skylights, Lights welcome back fans to the Armory with a doubleheader against the rival Blue Hawks 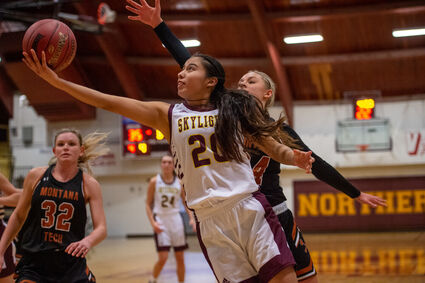 L'Tia Lawrence and the Montana State University-Northern Skylights will open their 2021-22 season tonight against Dickinson State inside the Armory Gymnasium.

Tonight, the Armory Gymnasium will have something inside it hasn't had for a college basketball game since February of 2020 - fans.

Yes, while the Montana State University-Northern men's and women's basketball teams had a 2020-21 season, fans were not a part of it, so tonight, when Northern opens its season with a doubleheader against Dickinson State University, a return to normal will happen as basketball fans are allowed back into the Armory.

"Our kids can't wait," MSU-N head coach Chris Mouat said. "Last year was very tough on them in so many ways. When we did get to play, especially at home, it was just so different. Our crowd does so much for us and we are just looking forward to seeing familiar faces in the gym again."

Indeed, tonight marks the return of real college basketball to Havre as both Northern teams kick off their season. The MSU-N women, led by the return of veterans Peyton Kehr and Sydney Hovde, as well as L'Tia Lawrence, Ryley Kehr, Cameron Mooney, Morgan Mason and Dulci SkunkCap, who all saw significant minutes last season, are excited to get things going again. And that group, mixed in with all of Northern's newcomers, has Mouat excited to see what they can do tonight against an old rival in the Blue Hawks.

"We have five new kids joining us this year," Mouat said. "They have all done a great job and are great additions to what we had coming back. Obviously, we lost a ton with Allix, T (Gilham), and McKenzie, not only in terms of stats but also in leadership. This group has come together pretty quickly. We have had a few bumps in the road with injuries and sickness, but they have battled through things really well."

The Northern men are in much the same boat as the women. The Lights return a strong group led by All-Conference performers Mascio McCadney and David Harris, as well as Jesse Keltner and C.J. Nelson. That veteran group will be joined by a plethora of talented newcomers who should give the Lights plenty of firepower for longtime head coach Shawn Huse.

"This is a great group of guys top to bottom," Huse said. "I love the character, resiliency and toughness this team has. We have a great core of leaders returning, some bench guys that should step up well this year, and some new guys that should make a big impact for us."

Tonight's opener against a DSU squad that the Lights haven't seen in more than two years will be a great way for Huse to see where his team is at in the early going. But beyond that, he too is excited for a normal night in the Armory. 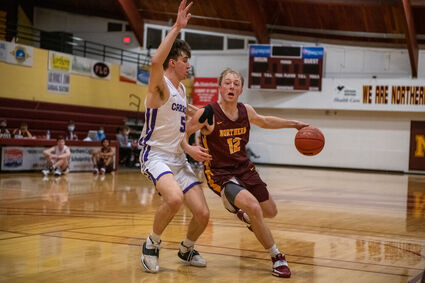 C.J. Nelson drives past a Carroll defender in front of an empty Armory last winter. Fans will be back in the gym tonight when the Lights host the Blue Hawks for their season-opener.

"It feels like we did not have a season last year," Huse said. "Nothing beats playing in our gym in front of our fans. Almost one year ago, our preseason ended up being one game. In our first practice back after quarantine we lost one of our key players to injury and had others struggling to get their conditioning back. We are a hard-working, conditioning team, and it felt like we lost that whole first two months of stamina. That being said, other opponents had similar challenges and our group did a great job of preparing and fighting each week. Literally almost every game went to the wire. We won a good share, yet ended up on the short end of too many heartbreakers - games that I am confident we win with our fans in the building and all our players in shape and healthy. So I'm so excited to see us get back to normal."

The Northern women open the season against Dickinson State tonight at 5:30, followed by the Lights and Blue Hawks at 7:30 inside the Armory Gymnasium.