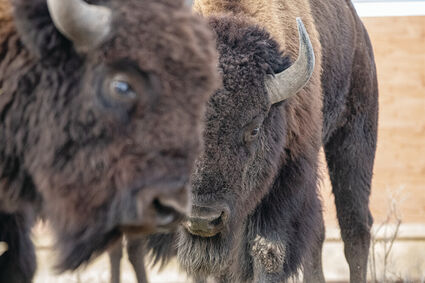 Bison stand in a pen on Rocky Boy's Indian Reservation Tuesday before they are released onto the reservation.

Rocky Boy - Tuesday was a day of celebration on Rocky Boy's Indian Reservation as the area became home to bison for the first time in over two decades.

After a celebration that included dancing, prayers and food, 11 bison were released and hundreds, including many local schools' students, looked on as they ran into the reserve just west of Box Elder.

The return of the animals is an event that's been a long time coming, and is of incredible significance not just to the local environment but to the culture of Rocky Boy.

Guest speakers from the area and beyond talked that morning about the...