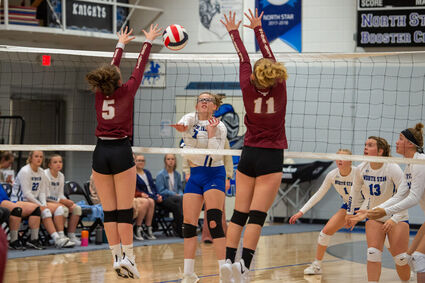 The North Star Knights and Fort Benton Longhorns are two of nine teams that will be battling for the District 7C volleyball championship this weekend in Chinook. The top four teams from the tournament also advance to next week's Northern C Divisional in Belt. The District 7C tournament starts Thursday morning and runs through Saturday afternoon in Chinook.

A long volleyball season in the District 7C will culminate with the District 7C Volleyball Tournament this weekend in Chinook. From Thursday through Saturday, nine teams will compete for the district crown. With all those teams in the mix, it should be a long weekend with competitive volleyball.

"It's usually a fairly tough one," Chinook head coach Paula Molyneaux said about the tournament. "Usually we have at least one team that advances on to state from this district."

After that elimination match, the rest of the tournament will follow a double-elimination format. The winner of the opening match will advance to play No. 1 seed Geraldine/Highwood at noon Thursday. The Rivals earned the No. 1 seed in the tournament by going 16-0 through the regular season.

Later on in the afternoon, Chinook will play against Big Sandy. Chinook enters the match as the tournament's No. 3 seed after finishing the regular season with a 12-4 conference record. Big Sandy is the No. 6 seed because of its 7-9 conference record during the season. As her team begins postseason competition, Molyneaux wants her team to just stick to what has made them successful through the season.

"(I hope) for us to play our best game and keep going with that as far as we can through the tournament," Molyneaux said.

In the last match of the opening round, No. 2 seed Fort Benton will play No. 7 seed Centerville. Fort Benton enters the weekend with a 14-2 record while Centerville has a 4-12 record.

On Thursday night, the tournament will continue with a pair of matches to determine who will play in the semifinal match Friday. The first match will see the winner of the CJI-North Star match go against either Geraldine/Highwood, HLP or Box Elder. The last match of the night will then take place between the winner of the Chinook-Big Sandy match and the winner of the Fort Benton-Centerville match.

The tournament will continue with many elimination matches through Friday morning and afternoon. Friday will then culminate with the semifinal match to determine who advances to the championship match the next day.

Another elimination match will be held Saturday morning to see who gets to play in the championship match at 4 p.m. Saturday. If a team wants to survive the tournament and make it all the way to Saturday evening, it will need all its players to leave it all out on the court this weekend.

"A team would need to play at their best. There's some good teams in this district and who knows who's going to emerge the winner," Molyneaux said. "If you want to be that one, you've got to put your best game on the floor every time you step on there."

The District 7C Volleyball Tournament will begin in Chinook Thursday at 9 a.m. with an elimination match between Box Elder and HLP. The tournament will end on Saturday at 4 p.m. with the championship match. The top four teams advance to the Northern C Divisional Tournament next week.