Skylights return to normal by thrashing the Blue Hawks

With fans back in the stands, Northern women roll past Dickinson State 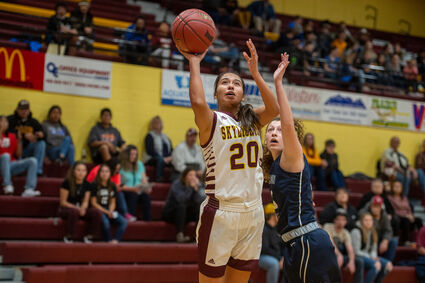 Montana State University-Northern's L'Tia Lawrence floats a shot during Tuesday night's season-opening game against Dickinson State in Havre. The game was the first college basketball game to be played in front of fans in the Armory Gymnasium since the winter of 2020. The Skylights won 75-58.

It was going to be a happy season-opener regardless. Because fans were back in the Armory Gymnasium for a college basketball game. But the fact that the Montana State University-Northern Skylights dominated the Dickinson State Blue Hawks made it that much sweeter.

Tuesday night in the Armory, Northern opened the 2021-22 campaign with a 75-58 win over the Blue Hawks in what was the first basketball game played in the Armory in front of fans since the end of the 2019 season.

"It was exciting, it was different," senior Peyton Kehr said of playing in front of a home crowd again. "Our fans are...