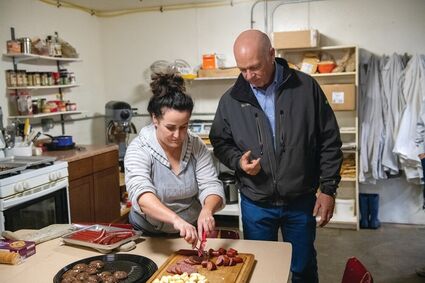 Gov. Greg Gianforte visited Blaine, Hill and Liberty counties Wednesday, where he spoke representatives of Rocky Boy's Indian Reservation, the operators of Bear Paw Meats in Chinook and the staff of Liberty Medical Center in Chester, as part of his 56-county tour.

At Bear Paw Meats, Gianforte spoke to owners Dexter and Karla Buck, as well as their daughter and Bear Paw Meats Manager Ashley Buck, who took him on a tour of the facility.

During the tour, Ashley Buck talked about how they used grant money from the state, and showed him the equipment it helped buy, as well as the food that equipment helped produce.

"They put that money to good use," he said in an interview after sampling some of the products.

As they toured the facility, the Bucks talked about operations, potential expansion plans and staffing and Gianforte suggested a few programs the state has that may be able to help them out by helping pay for workers to get more training through education, covering up to half of their tuition.

He said the efforts of businesses like Bear Paw Meats supports investigations into the increased consolidation in the meatpacking industry, which he said has gone too far in recent years.

Gianforte said he wants to know if laws are being broken in the industry with all of this consolidation and he's sent letters to the U.S. Department of Agriculture encouraging them to investigate and address the issue.

On the state level, he said, the Montana Department of Agriculture is focusing on supporting value-added ag products which will help producers get a fair price for their goods.

During his visit to north-central Montana, he also spoke to the staff at Liberty Medical Center in Chester and thanked them for their work on the night of the Amtrak derailment outside of Joplin last month.

Gianforte said Liberty Medical Center CEO Ron Gleason's team preformed admirably that night, and he thought he should thank them in person, which he didn't have the chance to do when he was in Chester last month.

He also visited with representatives of Rocky Boy's Indian Reservation, returning their flag, which had to be retired, from the state capital.

About a year ago, he said, a tribal flag plaza was built at the state capital and the Chippewa Cree's flag flew at the capital for the first time upon the plaza's completion.

The flag was retired in June and, given the importance of the flag and what it represents, he decided that he would return it to the tribe himself, along with a certificate commemorating the state's partnership with the tribe, he said.