Bree Swanson and the Chinook Sugarbeeters ready for another run 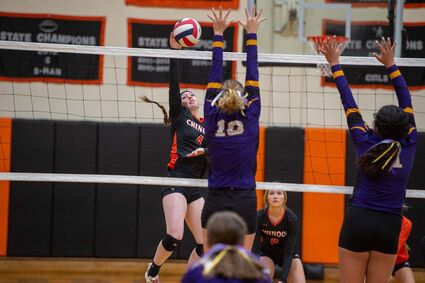 Chinook's Bree Swanson spikes the ball against Big Sandy Thursday in the opening match of the District 7C Volleyball Tournament in Chinook. Swanson and the Sugarbeeters swept Big Sandy to open the tournament.

As the District 7C Volleyball Tournament rages on in Chinook over the weekend, several teams will battle for the district title. As the host school, Chinook will be looking to win the tournament after finishing second last year. The Sugarbeeters are led by the likes of junior Bree Swanson who believes they have a chance to make a run.

"We worked really hard in practice and I think we just need to keep going on and be strong with that," Swanson said. "We have a good chance at it so we just got to keep working hard and have our heads in the game."

Swanson has not been playing volleyball for...