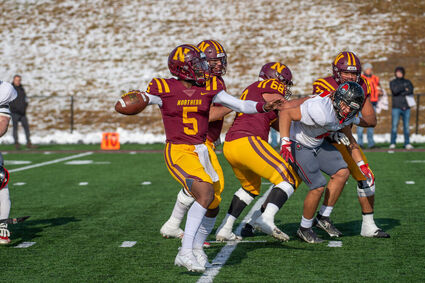 Northern's Kaymen Cureton prepares to throw a pass against Montana Western at Tilleman Field Saturday. The Lights' offense failed to move the chains on Saturday as the Lights only gained 20 yards of offense and five first downs in the 63-7 loss to the Bulldogs.

After a solid showing in their win over Eastern Oregon University last weekend, the Lights had one of their worst games of the season on offense. Against the Bulldogs, the Lights recorded season lows in first downs, passing yards, rushing yards and total offense.

The Lights went three-and-out on their first six drives of the game and did not get their first first down of the day until the final moments of the first half. The Lights only recorded five first downs in the game.

In his second straight start at quarterback, Kaymen Cureton completed six of his 20 pass attempts for 29 yards an...