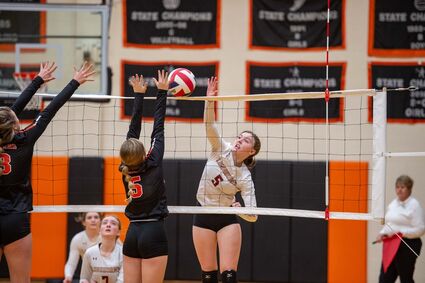 Fort Benton's Emerson Giese, right, goes for a kill against Chinook in a District 7C tournament match last Thursday in Chinook. The Longhorns lost in the championship match to finish second, while the Sugarbeeters took third.

Three area teams are headed to the Northern C Divisional Volleyball Tournament later this week. That's because, Fort Benton, Chinook and Chester-Joplin-Inverness all finished in the top four at last weekend's District 7C tourney in Chinook.

The Longhorns had reached the chipper with a 25-27, 25-15, 25-17 and 25-17 win over Chinook earlier Saturday in the third-place match. Fort Benton's march toward a third straight berth in the Northern C cam...