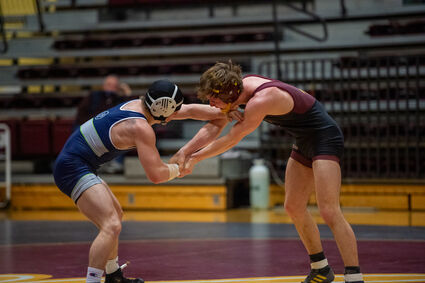 Nick Kunz, right, and the Montana State University-Northern Lights make their home debut tonight when they host the Northwest College Trappers in the Armory Gymnasium.

It was a nail biter of a start to the 2021-22 wrestling season for the Montana State University-Northern Lights.

Last Friday night, the No. 18 Lights opened the season with a gut-wrenching 21-20 loss at North Idaho. The Cardinals are ranked No. 11 in the NJCAA to start the season.

In the season-opening dual, former Havre Blue Ponies Martin Wilkie (141) and Connor Harris (157) scored winns for the Lights, as did No. 9 Chase Short at 165 pounds, Nakoda Siegel at 174 pounds and top-ranked Isaac Bartel at 197. But, as hard as the Lights fought, they fell just short at NIC.