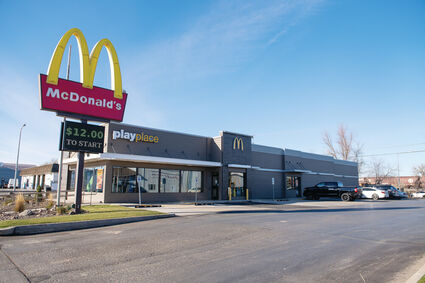 Sun shines on the Havre McDonald's Monday. The new owners of the Havre restaurant have re-opened the lobby, the first time it has been open since March 2020.

For the first time since the start of the pandemic, Havre's McDonald's is again fully open.

The restaurant is under new ownership and, Tuesday morning, they opened its lobby and the PlayPlace.

The branch is now owned by Bill and Joey Himmelberg, a father and son who own the three McDonald's francises in Great Falls.

"We've been there for 40 years," Joey Himmelberg said Tuesday, "And we have looked at Havre a number of times, and when Jeff (Ralph) decided he was selling we thought it would be a good opportunity for us."

Himmelberg said outside of opening the lobby and PlayPlace, they are not looking at any huge changes in the near future, and complimented his predecessor's work.

"Jeff did a lot of good things here, and we're looking to continue the things he did, and the great atmosphere he created," he said.

Director of Operations Casey Schearer said the opening of the lobby has been a big step, and something the community asked about almost immediately upon their arrival.

"Everyone in the community has been super welcoming, all with open arms," Schearer said, "And the first words out of their mouths was 'are you going to open the lobby?'"

The lobby has not been open for 20 months, since the COVID-19 pandemic hit Montana.

Schearer said, for now, the lobby will mostly be relying on their app and the kiosks to operate as they need more staff, which they are always looking for, to return the lobby to its normal pre-pandemic operations.

Regardless, he said, having the lobby open will help them build a more personal connection with the community.

The PlayPlace is also open, which Schearer said is perfect timing with the weather getting colder, giving children a place to hang out and warm up.

"We are firm believers in PlayPlace," he said.

He said they are sanitizing these areas and are looking to maintain social distancing as more and more people come in.

Himmelberg said it's been a trickle of people so far, but they expect more as the word gets out, and they're excited to meet everyone.