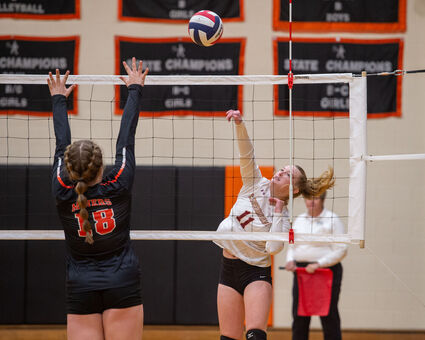 Fort Benton's Samantha Vielleux spikes the ball against Centerville in the District 7C Volleyball Tournament last Thursday in Chinook. After finishing second in the District 7C, the Longhorns opened the Northern C Divisional Volleyball Tournament with a match against Great Falls Central this morning. In Belt, the Longhorns will try to make a run as they try to defend their divisional title from last season.

As postseason volleyball continues across Montana, the Hi-Line will be well represented in the Northern C Divisional Volleyball Tournament in Belt this weekend. After finishing high in the District 7C tournament last week in Chinook, Fort Benton, Chester-Joplin-Inverness and Chinook will have a shot at a divisional title in this weekend's double-elimination tournament.

The tournament began this morning with a match between CJI and Simms. The Hawks entered the tournament with an 11-8 record after finishing fourth in the District 7C last weekend. They will have their hands full with Simms wh...