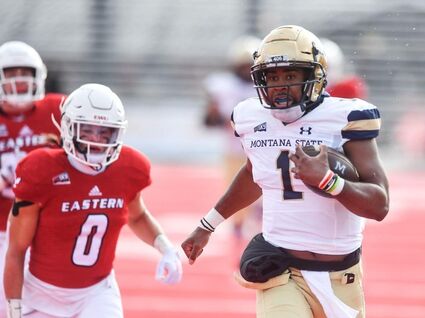 Montana State University quarterback Matt McKay runs with the ball during Saturday's huge Big Sky Conference game between the No. 4 Bobcats and No. 5 Eastern Washington Eagles in Cheney, Washington. The Cats won 23-20 to take control of the Big Sky.

CHENEY, Washington - Isaiah Ifanse continued to make history with his legs and No. 4 Montana State's defense held the most explosive offense in the FCS to 20 points, 17 first downs and 314 total yards in the Bobcats' 23-20 win at No. 5 Eastern Washington Saturday.

Ifanse rambled for 217 yards, his second 200-yard rushing game this season and his third as a Bobcat. His 14th career 100-yard rushing game is fifth in school history. He gained at least 40 yards in each of the first three quarters, then at closing time in the fourth he gashed the Eagles for 75 yards. The sensational junior gaine...