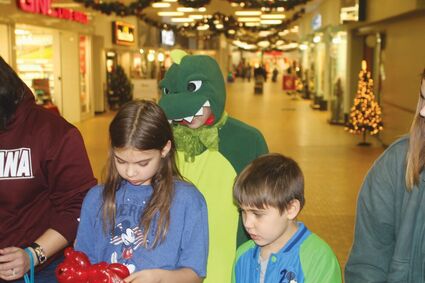 Children participate in Dinosaur Christmas activities outside the H. Earl Clack Memorial Museum in the Holiday Village Mall. After a year off due to the COVID-19 pandemic, Dinosaur Christmas is back, tentatively set for Saturday, Dec. 4.

The H. Earl Clack Museum Board met Monday evening and announced that Dinosaur Christmas is being set up for next month, and discussed ongoing work at the museum's eventual new location at the former Griggs Printing Building on the 10 Block of Fifth Avenue.

Dinosaur Christmas will take place Dec. 4 in front of the museum in the Holiday Village Mall from 1 to 3 p.m. and feature arts, crafts and cookie decorating for children.

Board Chair Lela Patera said, due to the COVID-19 pandemic there is always a possibility the event may still be canceled later, but for now it is proceeding as planned.

Morse said a lot of progress has been made in the last two weeks especially on the bathroom walls, some of which are not quite finished yet as they need new plumbing installed.

She said an electrician coming in this week to move switches and put in lights for the bathroom as well, and a great deal of progress has been made on painting.

Unfortunately, she said, the contractors working on the lead-based paint and asbestos abatement still have not returned the buildings windows and reinstalled them, which she said they have been promising to do for two weeks.

Board Vice-Chair David Sageser said he's working on getting a security system set up but every installation outfit he's talked to said they need to do a survey and he needs to know how extensive the board wants the security system to be.

Museum Manager Emily Mayer also provided a brief update on activities at the museum which have been fairly normal.

Mayer said the buffalo jump has been quiet and in the meantime work is being done on the stairs and ramp to the interpretive center and the teepee is being taken down.

She also mentioned that the Montana Dinosaur Trail is entertaining a proposal to raise the price of their passports from $5 to $8 and based on the response from most museums it looks likely to pass.

She said the price of these passports hasn't changed in more than a decade and a recent cost analysis shows that their value is greater than what is being charged.

Mayer requested Thanksgiving week off as well and the board unanimously voted to close the museum between Nov. 23 and 27 so she can have that time off without having to worry about finding a temporary replacement.