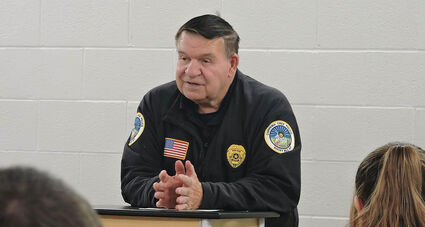 Chippewa Cree Police Chief Larry Bernard talks during his retirement ceremony Tuesday at the Chippewa Cree Police Department. Bernard served as a law enforcement officer for 43 years, including as chief of police at Rocky Boy's Indian Reservation since 2016.

Tuesday, the Chippewa Cree Police Department at Rocky Boy's Indian Reservation bid farewell to its chief of police, Larry Bernard, who served as a law enforcement officer for more than 43 years before deciding to take off the badge.

He was widely known amongst police officers, having served in Wyoming, Idaho and Montana, and was a highly respected man in the field, his niece Kirstin Russell said.

Festivities began at noon in the recreation room in the Chipeewa Cree Police Department with Rocky Boy Police Lt. Sean Richardson letting everyone in room know they were t...